Palani Murugan (Dhandyuthapani) Temple of Dindigul district is the famous temple drawing largest number of pilgrimage in Tamil Nadu. The temple is at the foot of Pazhani hills with several lakes, the largest being VaiyyapuriKolam lake. A beautiful scenario of the Palani town can be relished from the hill-top temple.The Palani Murugan Temple wherein God Subramanya is worshipped is one of the six deities (Arupadaiveedu) of Lord Murugan. It is an ancient temple at a height of 1500 feet above sea-level. The deity holds a Staff in his hand and hence the name Dandyaudhapani. The deity was created by Sage Bogar which is made of an amalgam of nine minerals (Navabashana). The deity is in a standing position with a baton in his hand and is placed on a pedestal stone with an archway framing it. The temple priests who are from Gurukal Community are only allowed to serve and handle the deity and the priest’s assistants from Pandaram community are allowed only up to the anti-chamber of the sanctum.

The Legend:According to the Hindu mythology, the Murugan temple has a story behind that says once Narada Muni (Sage) brought a fruit of wisdom (Gyana-pazham) and presented to Lord Shiva at his court. Lord Shiva intended to divide the fruit between his two sons Lord Vinayaka and Lord Subramnaya but the sage counselled against cutting it. Hence he decided to present the fruit to one who completes three rounds around the globe first. Lord Subramanya mounted on his peacock and left immediately but Lord Vinayaka rounded his parents three times symbolising them as the world and received the fruit. Lord Subramanya on knowing about the result got furious and renounced his family by settling on the Pazhani hills forever.

The main festivals celebrated here are PanguniUtthiram, Thaipoosam and KandiSasthi.

Different types of Kavadis are brought by devotees and offered by Padayatra (foot pilgrimage) during the Thai Pucam time.

It is believed that Lord Murugan is fond of Panchamrita Abhishekam. However the Devasthanam prepares Panchamrita, vibhuti and other items which are sold at reasonable prices in the temple premises. In addition, Daily Annadanam takes place for poor pilgrimage at 12.30 pm.The temple is reached either by steps of 697 or by winch trolleys.

The temple economy comes from the Hundi (cash collection box) and has the honour of being the second largest income in India after Tirupathi Devasthanam. 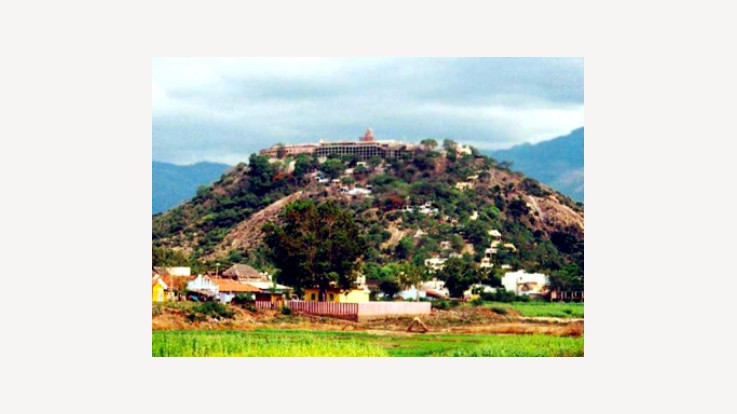 There are six puja taking place on every day basis. The puja schedule is as follows:

How to reach Temple:

Air: Palani is reached by just three hours drive from any of the nearest airports: Coimbatore, Madurai and Tiruchy. The nearest tourist information office is at Madurai.

Train: Trains to Palani are available from Coimbatore, Palakkad and Dindigul. The Murugan Temple is about 2 km from the railway station . It is an important railway station on the Dindugal-Coimbatore line.

Road: The state transport corporation and a lot of private buses available from major cities to Palani in Tamil Nadu (Chennai, Coimbatore, Madurai, Tuticorin etc) and also to the neighboring Kerala(Palakkadu, Kochin). Palani is 56 km far from Dindigul, 103 km from Coimbatore and 114 km from Madurai.