The term Panch Prayag literally translates as "confluence". Prayag signifies conflux of two or more rivers. Vishnuprayag, Nandaprayag, Karnaprayag, Rudraprayag and Devprayag are the Panch Prayag. Prayag at Allahabad, where the three rivers Ganga, Yamuna and Saraswati conflux is considered as the holiest. Panch Prayag is the next in the order of piousness. The Panch Prayag are rich not only with the legend but also in scenic beauty. Panch Prayag located on the road to Badrinath is also known as Swargarohana or heaven route which was followed by the Pandavas to attain salvation. 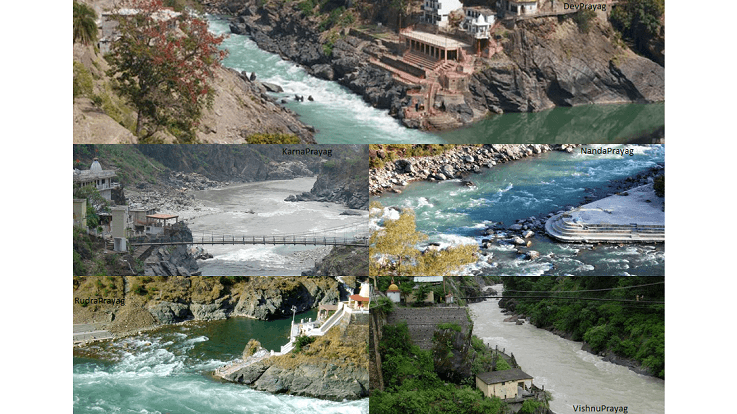 Vishnu Prayag is first among Panch Prayag. It is located on the banks of Alaknanda river. It flows in front of the Badrinath temple. Sage Narada worshipped Lord Vishnu at this conflux. An octagonal temple is located near the conflux which dates back to 1889. It now houses a Vishnu idol.

Nand Prayag is the second Prayag where Nandakini river joins Alaknanda river. According to a tale, King Nanda performed Haven at this place. Hence, the conflux is named after him. Another legend narrates that sage Kanva performed penance at this site.

At Karn Prayag, Alaknanda river joins Pindar river. The legend narrates that Karna performed penance and earned the protective armour and ear rings from Sun. This gave him indestructible powers. The name of this conflux is derived from the name of Karna. It is also believed that Swami Vivekananda meditated here for eighteen days. A local legend says that a landlord killed a cow in this pasture land. To get rid of the sin, he requested a pilgrim to help him. The philanthropic Pilgrim helped the landlord to buy the grazing land. He dedicated it to Lord Badrinath with the vow that the land would be used only for the purpose of grazing by cows.

At Rudra Prayag, river Alaknanda meets Mandakini. The conflux is named after Lord Shiva, who is also known as Rudra. According to a legend, Shiva performed Tandava and played his favourite Rudra Veena at this site.

According to a legend narrates that sage Narada became egotistic by his Veena playing skills. Lord Krishna told Narada that Shiva and Parvati were impressed by his skill. Narada set out to meet Shiva. At Rudra Prayag, he met several disfigured Raginis (musical notes). The reason for their disfiguration was attributed to Veena playing skill of Narada. Hearing this, Narada felt humbled and decided to learn music as a disciple of Shiva.

Devprayag is the confluence of river Alaknanda and Bhagirathi. This is the first Prayag on the way to Badrinath shrine. The holiness of this place is equal to the Triveni Sangam at Allahabad where the Ganges, Yamuna and Saraswati rivers meld.

At every conflux, a large number of pilgrims visits the Panch Kedar and Sapta Badri temples. Many pilgrims take a holy dip at all the Panch Prayags before worshipping Lord Vishnu at Badrinath. Locals and devotees gather at the five prayags during Makara Sankranti, Basant Panchami and Ram Navami festivals for a holy bath in the sacred river confluxes.