Nestled in the Saldi village of Mehsana district, Gujarat, Pimpleshwar Mahadev temple is devoted to Lord Shiva. The striking feature of Pimpleshwar Mahadev temple is that it doesn’t have the usual Shiva linga. Instead, it has a Jaladhari or a continuous flow of water which emerges out of the ground. This natural water stream is considered to be sacred and an indication of the presence of Lord Shiva at this site. The temple is famous for its landscape and Pipal trees, Bili Trees and Vakhada trees of ancient age in the surrounding area of the temple. The temple has not been renovated for at least 100 years, hence it portrays an old style outlook which attracts pilgrims as it reminds a by-gone era. The temple is spread over 50 acres. It also houses the shrines of Goddess Umiya, Amba, Lakshmi, and Nag-Devta. A stone carved images of Lord Ganesha, Goddess Parvati and Lord Hanuman can be seen in the temple. The temple also has facilities such as an exhibition hall, a meeting room, guest rooms, and a dining hall. 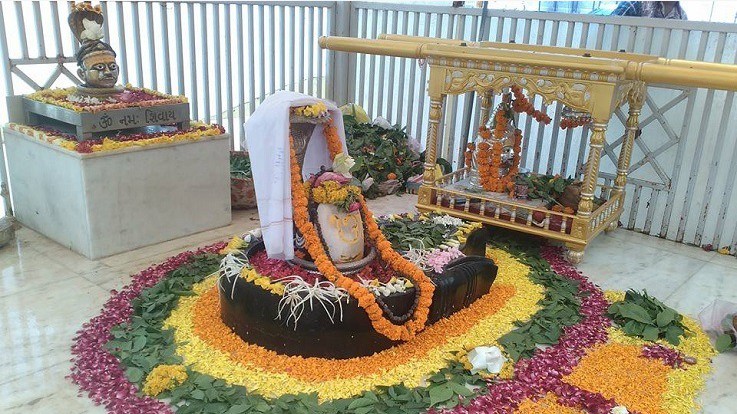 Pimpleshwar temple was constructed by Petha Patel of Saldi. The temple history dates back to the 1086 AD. The present edifice was built and renovated in 1895 by Sayajirao Gaekwad, the ruler of Baroda state, during the British colonial era in India.

As per the local legend, one of the cows of a herder Petha Patel was found to be regularly pouring her milk under a Pipal tree. Later, the Jaladhari water source was discovered at this site. The cow offering her milk at this site without any assistance led to the locals of Saldi to attribute this miracle to the existence of Lord Shiva at that place. Since then, Pimpleshwar Mahadev is considered to be very sacred by the devotees and natives. The temple has become popular and revered throughout the state of Gujarat over the years. 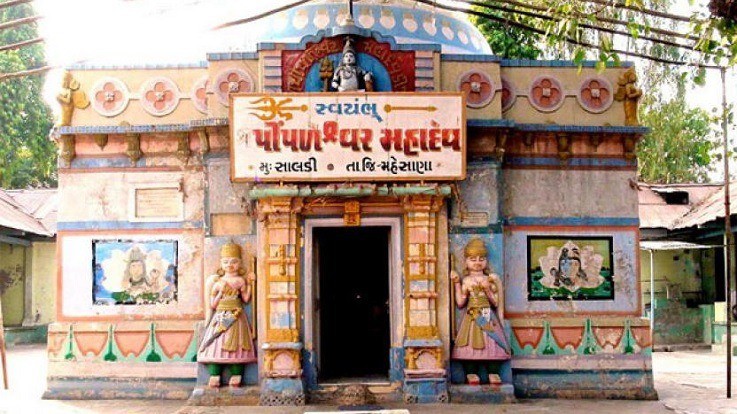 Pimpleshwar Mahadev is famous for its annual traditional "Saladi Mela" which is organized on the last Monday of the holy month of Shravan. The festival of Maha Shivratri is celebrated with great dedication. Devotees observe fast and sing bhajans. A maha puja and Ladhu-Rudra Yagna are conducted with the recitation of Sanskrit Shlokas. Lord Shiva is offered of prayers, flowers, fruits, coconut, and Prasad. In the holy month of Shravan, thousands of devotees visit Pimpleshwar Mahadev to get blessings. Pilgrims walk to the temple chanting Shiva Stotra, playing traditional music and dancing. Devotees chant Shiva mantra with great faith as they offer milk, water, dhoop and Bili leaves to Lord Shiva.

By Air: The nearest airport to Ghumli is Sardar Vallabhbhai Patel airport which is located at Ahmedabad.

By Road: Saldi is located about 60 km from Ahmedabad. Saldi is reachable by car and bus.