There are many legends associated with this temple. According to one legend, The Saptashrungi Devi appeared here on the hills when all the devtas pleaded and worshipped the Goddess Shakti to destroy the Rakshash Mahishasur. Then the goddess Shakti originated here in the form of Devi Saptashrungi to slaughter the demon Mahishasur. According to the Bhagavad-Gita, there are total 108 Shaktipeeths and one of them is Saptashrungi Temple. This story is considered as the true legend as there’s a head of Mahishasur in stone form on the beginning of the temple steps, which was slaughtered by the goddess. The demon Mahishasur was a man with Buffalo head. This head is present on the footsteps of the temple.

It is believed that the temple was visited by the Lord Rama, Mata Seeta and Lord Laxman during their excursion period and worshipped the goddess Saptashrungi. The Saptashrunga hill is said to be having many medicinal value plants and herbs. The Great Lord Hanumanji got the medicine from this temple for Lord Laxman when he was wounded during the war. 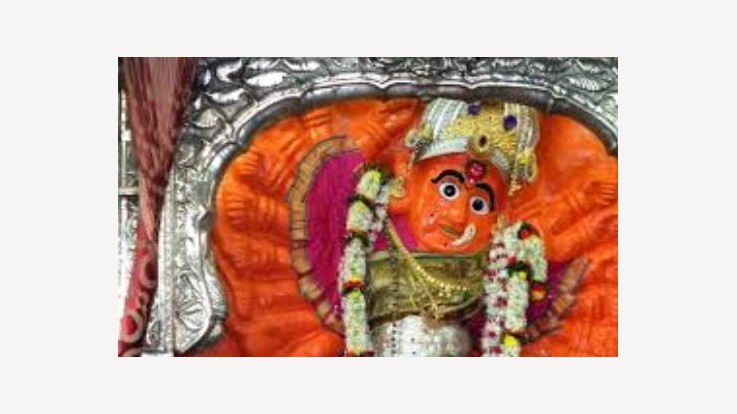 The temple is not only surrounded by breathtaking views and deep valleys but has many small streams flowing from the mountain. There about 108 water reservoirs on this hill.The sight of the temple is mesmerizing during the Navratri when all the 108 kunds or water reservoirs lighted with diyas.

The shrine of the Goddess Saptashrungi is always covered in the sindoor and has 18 arms holding different weaponry in each hand. The sindoor is a red powder for the married women and is considered very fortunate in the Hindu religion.

Every full moon day, people gather here to offer the Saree and coconuts to the goddess. Even on Navratri this tradition is carried on every day.

The goddess is said to be the “Mahishasur Mardini” as she had slaughtered the demon Mahishasur. The temple celebrates its main festivals in the month of Chaitra and Ashvin Navrati of the Hindu calendar.

By Road:-Saptashrungi Devi Temple is located at kalwan Tehsil in Nashik District in Maharashtra State of India. The temple is well connected with the city of Nashik with state transport buses.

By Rail:-Nashik railway station is the nearest station.

By Air:-Nashik airport  is the nearest airport.

Bhadrakali Temple: The divine temple of the divine