Shiv Khori cave temple is nestled in Ransoo village of Reasi district in Jammu Kashmir. The cave is considered a real wonder. It is an unendurable cave which leads to Swami Amarnath Cave. Shiv Khori cave is nearly half a kilometer long, however, the pilgrims are allowed to move only up to 130 m due to the lack of oxygen. It is said that the temple has the naturally created Shiva Lingam. The cave is 200 m long, 1 m wide and 3 m high. The first entrance towards the cave is wider. Around 300 people can enter inside the cave at a time. However, the inner chamber of the cave is smaller. To reach the main sanctum, devotee needs to crawl inside.

Khori means cave (Gufa) and Shiv Khori thus denotes Shiva's cave. The story of Shiv Khori is associated with a demon, Bhasmasura. He had acquired blessings from Lord Shiva after a deep meditation. According to it, he was capable of ending up the life of anyone by keeping his hand on their head. Bhamsmasur became arrogant and he tried to end up the life of Lord Shiva. Hence, Lord Shiva went inside this cave to save his life. Thus, the cave got its name, Shiv Khori. Later, Lord Vishnu appeared in the disguise of Mohini and lured the demon, forcing him to dance with her. Bhasmasur was so engrossed in dancing with Mohini that he put his hand over his own head and thus killed himself with his own powers. The cave houses 33 crore deities in the form of the Pindis. A natural stream of water tends to fall upon them from the ceiling of the cave.

As per the another legend, it is also believed that Shiv Khori was discovered by a Muslim shepherd who went inside the cave in search of his goats. He saw several sages worshipping Lord Shiva inside the cave. He was attracted by the divine power and started praying there. Regardless of the promise made not to reveal the secret of the sages and the cave, the shepherd announced it to locals. And thus natives came to know about this cave temple. 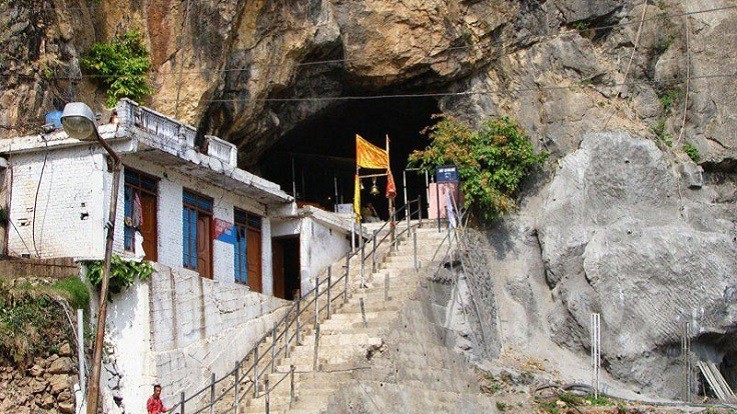 Every year, three days fair is held on the occasion of Maha Shivratri. Thousands of tourists visit the temple to seek blessings of Lord Shiva.

By Air: The nearest airport is located in Jammu.

By Road: Shivkhori is 43 km from Reasi, 80 km from Katra, and 140 km from Jammu. Taxies, Van, cabs, buses and Tempo Traveler are available from Katra, Udhampur, and Jammu.