Sri Kollur Mookambika Temple is an ancient temple offering the best spiritual experience to the devotees and Goddess Adi Shakti worshipped in the form of Linga as Devi Mookambika. The Sri Kshethram in Kollur of Udupi district, Karnataka was established by AdiShankaracharya under the direction of Devi Mookambika. However, the temple is one among the seven Mukti pilgrimage temples around Karnataka found by Parashurama. According to Hindu mythology, Adi Shakti is the confluence of powers of Mahakali, Mahalakshmi and Mahasaraswati.

The temple nestled on the banks of River Souparnika, dates back to around 1200 years and the temple being a calm place with serene atmosphere rests against the backdrop of Kodachadri hills along the western coast. The Goddess Mookambika, worshipped in the form of Jyothirlinga, incorporates both Shiva, on left side and Adishakti, on right side wherein a golden-chain divides the Jyothirlinga into right and left portions. AdiShankarcharya had installed the Panchloha image (metal of five elements) of the Goddess on the Sri Chakra as per the image viewed during his meditation.

The main entrance at the eastern side leads to the Goldplated Dhwajasthambha and a Deepasthambha behind to it with a beautiful image of Ganapathy sculpture on the pillar, popularly called as Pillar Ganapathy. The devotees first offer their prayers here and enter the sanctum sanctuary of Devi Mookambika statue placed in front of the Jyothirlinga. The Devi in a seated posture has a slight smile on her face and her two arms hold Shanka and Chakra on either side. 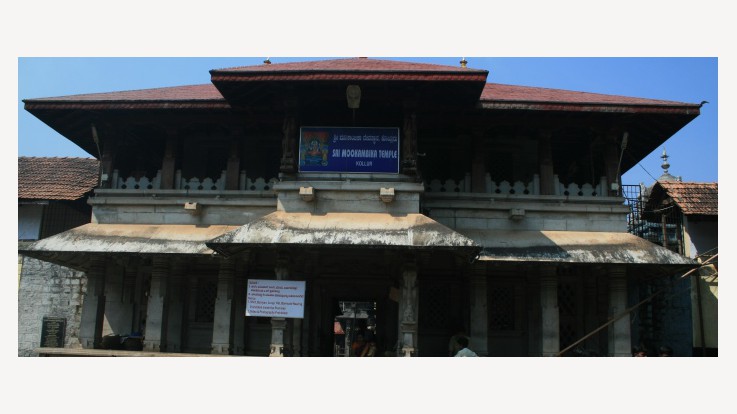 According to the SkandaPurana, the evil demon Kaumhasura, who had wished to obtain a powerful blessing from Lord Shiva was terminated to death by Devi. Vagdevi made Kaumhasura dumb to disable his evil wishes and hence called as Mookasura. The angry Mookasura caused destruction to Gods and the Saptarishis and they requested Devi to protect them. Devi along with the powers of Brahma, Vishnu and Mahesh demolished Mookasura. And later onwards, Devi named as Mookambika continued protecting her devotees.

The other places within the temple: Lord Ganapathy on south-side, Naagaprathistha on southwest-side and the AdiShankaracharya’s Peetha on west-side. The temple’s outer circle composes worship of Lord VeerabhadraSwamy, Lord SubrahmanyaSwamy and the SaraswatiMantapam on the south-side. Lot of rituals is performed at SaraswatiMantapam for example Vidyarambha, Anna Prashana and other cultural activities. The other temples at the outer portion on west-side are of Lord Pranalingeshwara, Lord Partheshwara, Panchamukhi Ganapathy, Lord Chandramouleeshwara, Lord Anjaneya, Lord Venkataramana and Tulasi Gopalakrishna. 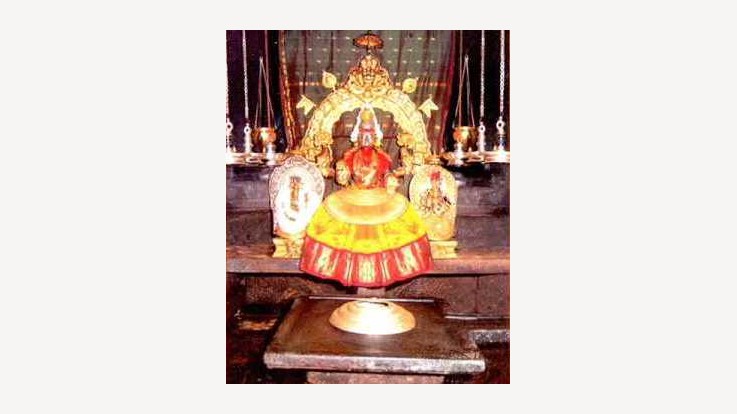 The major festivals celebrated are Navaratri Festival, Mahashivaratri, The Annual Festival held for 9 days in the month of March/April, Ugadi, ChandikaHoma and the AshtabhandaBrahmakalashotsva (celebrated once in 12 years).The Navaratri festival has special decoration of Goddess on all the nine days named as Navadurgalankara. Also special puja such as ShathaRudrabhishekas, ChandikaHoma and Rathotsava (Chariot journey) are performed. The devotees visit during Navaratri reaches the peak.

In addition, the Dhanurmasa season visions special puja with a variety of food offerings are performed.

By Road :-Mangalore city is only 50 km away from Udupi. Express buses ply between Mangalore to Udupi at regular intervals.

By Train :-The railway station at Udupi falls on the Konkan Railway network and there are trains to most major cities of the state.From Udupi we can reach mookambika temple by bus or by taxi easily.

By Air :-The nearest airport is the Mangalore airport located at Bajpe, 60 km away from Udupi. There are 2 flights daily from Mumbai,Bangalore and from other parts of India.From their we can reach Kollur Mookambika Temple by car.