The popular temple of Talesvara Siva temple is located at Bhubaneswar town in Khordha district of Orissa. This temple is consecrated to Lord Shiva. This temple is east facing with an elevation of 52 ft. Taleswar Siva is a living temple, which means the temple is meant for worshiping the presiding deity. Talesvara Siva Temple stands on the left side of the Kedar Gouri lane which emerges from the Parasuramesvara temple towards the Vaital temple at a distance of about 60 m. The temple stands 90 m towards the east of Kedargouri temple, 200 m towards the south of Anantavasudeva temple and 50 m towards the west of Uttaresvara temple. The presiding deity is a Shiva lingam with a circular Yoni Pitha in the sanctum which is 0.2 m below the chandrasila of the entrance doorway. Some years back the shrine was entirely renovated. 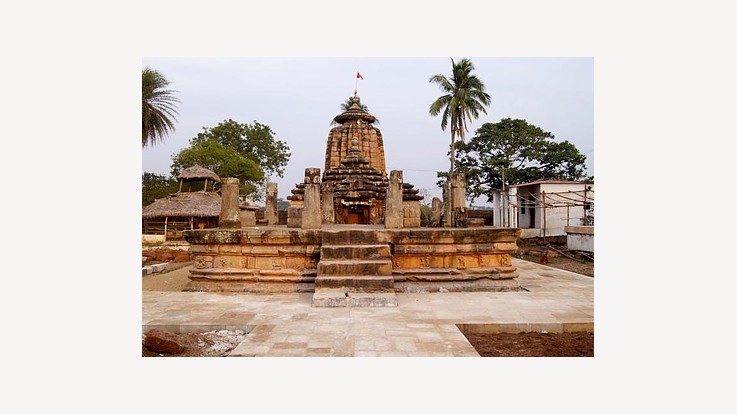 It is believed that the temple was built in the 8th century as several features such as the carved graha architrave with eight grahas, three molded pabhaga with archaic characteristics can be seen incorporated in the temple architecture. The entire edifice is established out of light grey sand stone. The exact temple history could not be ascertained as the temple was in dilapidated condition until the recent renovation. The temple is owned by and it is presently looked after by Sri Sudarsana Panda and his family. It is a Rekha Deul type of temple edifice but now the superstructure has no existence. The temple is surrounded by a compound wall which is made up of laterite blocks. The temple stands on a low platform and the sanctum is slightly below the present platform. The most beautiful image in the temple is that of a four armed Aja-Ekapada Bhairav in a subsidiary niche of the kanika paga towards the northern wall. He is holding an arrow in lower left hand, a trident in upper left hand. His upper right arm has a rosary and lower right arm is in Varada Mudra. The deity is adorned with a Jatamukuta. A seated male figure in Anjali Mudra is seen towards the right corner of the niche.

By Air: Biju Patnaik Airport located at Bhubaneswar is the nearest airport.

By Train: Bhubaneswar is the closest railway station.

By Road: The place is well connected by good roads with all the major towns of Odisha. Buses and private vehicles are available from Bhubaneswar bus stand.