Ekachakra village is located 20 km away from Rampurhat town in the Birbhum District of West Bengal. According to the Mahabharat, the five Pandavas were believed to be staying in Ekachakra during their exile. Ekachakra is the birthplace of Nityananda Rama who is a prominent religious leader in the Gaudiya Vaishnava tradition. The origin of the name Ekachakra is linked with Mahabharat war. During the battle of Kurukshetra, Lord Krishna broke his promise of not taking any sides in the war. He has rushed with a wheel to hit Bhishma who had been fighting with Arjuna. Bhishma pacified him with beautiful prayers. The wheel fell on this land and hence the place got the name Ekachakra. Eka means one, and chakra means wheel. It is the place where Demon Bakasura lived who was later killed by Bhima. 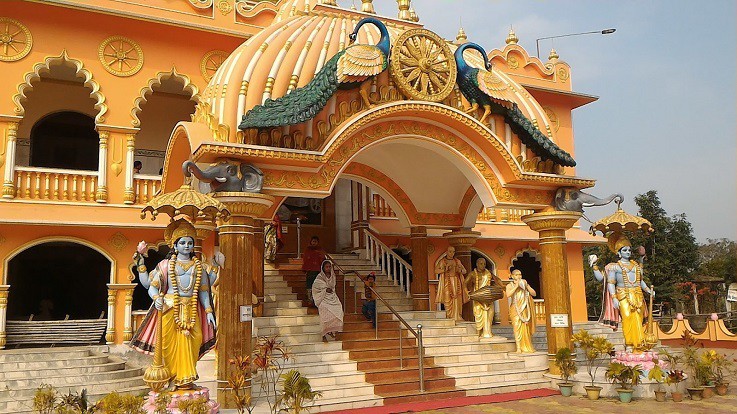 Sootika Mandir: Ekchakra is said to be the birthplace of Nityananda. Hadai Pandita Bhavan is the original house of Nityananda’s father. The small white temple next to Nitai Kund is the place where Nityananda was born. The two banyan trees next to this temple are in existence since the birth of Nityananda. In the center of the temple, an idol of Lord Nityananda can be seen along with the images of Chaitanya Mahaprabhu and Advaita Acharya. The side altar has idols of Radha-Radhakanta and Radha-Srikanta. The temple was constructed by Prasannakumara Karapharma.

Jahnu Kund is a lake which contains sacred waters from all the holy places. Nityananda brought sacred waters so that locals can take a holy dip in it. It is named Hantugada as Nityananda Prabhu used to celebrate the Dadhi-Cida festival by distributing chipped rice with yogurt at this place and he would take the Prasada while kneeling down. The pond also has a submerged Temple.

Pandavatala is the place where Pandavas stayed with their mother, Kunti, during the exile. The place has several Keli-Kadamba trees. At Pandavatala, there is an idol of Sri Sri Radha Krishna.

Bankim Raya temple houses an idol of Lord Krishna which was recovered by Nityananda from the Yamuna river of Ekachakra. The idol was then enshrined in a temple which is now submerged in Jahnu Kund. Nityananda is believed to have merged within this deity when he left the planet. The present temple of Bankima Raya is an ancient shrine.

Kadam Khandi is the place from where Lord Nityananda recovered the Bankima Raya idol. There’s a small shrine which houses images of Sri Gaur Nityananda, Krishna Balarama, and Sadbhuja Gauranga.

By Train: The nearby rail-head is Rampurhat railway station

By Road: Ekachakra is very well connected with roads and can be reached by buses and taxis.