It is believed that the temple was built in 1914. The temple has a black stone idol of the goddess. The main deity is Muthumariamman. A big Theppakulam (teertham) is located near the temple. The temple hall was constructed by collecting donation from the rich people

It is also believed that, goddess resolves trouble in marriage life after offering a special puja in this temple. The young women put their infants in sugarcane cradle, if the child got relived from some incurable diseases. Some even offer pair of eyes or hands made of steel wishing that all their diseases must get cured. Those seeking marriage prospective, offer a pearl of gold at the feet of the goddess. Locals have faith that Muthumariamman resolves all their troubles and problems. 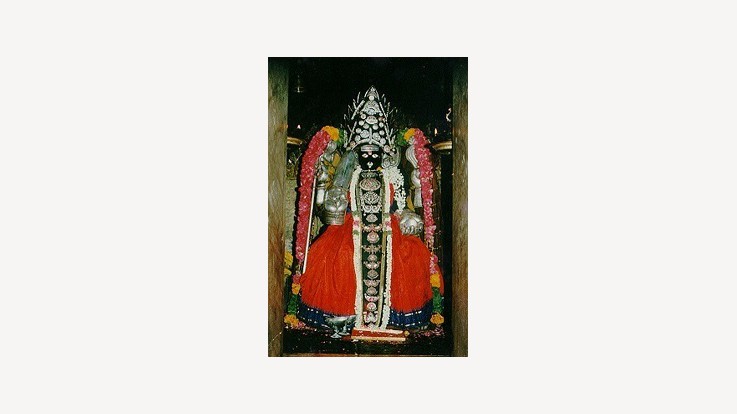 According to the legends, three hundred years ago there was a prominent trader named Muthuchettiar. He used to worship Meenakshi and Sokkanathar. He was rich but had no children and his family was worried over this.

One day while returning from Maduraiyampathi, he found a three-year-old girl crying isolated in Chinnamannur. He calmed down the child and since there was no one nearby, he felt that god has blessed him with child. He decided to take care of the child.

On his way, he left the girl on the banks of the river and went for bathing. He was shocked to see the girl missing on his return. He was unable to find the girl. He returned home and explained her wife about the happenings. The couple did not eat anything and both went on sleep. The girl appeared in his dream and asked him to make an idol of it and to worship regularly. As Muthuchettiar carried the girl on his shoulders, the girl instructed to combine his name along with the name of the Goddess, hence the idol of the Goddess was named as "Muthumaari". People made the idol using the sand from the riverside where the girl was found and built a tiny temple. The successors of Muthuchettiar are maintaining the temple for the past seven generations. It is believed that worshiping the Goddess will be provided with all the wealth.

Festivals and Celebrations:Thayamangalam Temple festival attracts thousands of people from all over the India and world. Every year the temple celebrates Panguni festival from March 20 to April 1. Pongal festival is celebrated on the 7th day of Panguni, Milk pot festival and Flower Pallakku on the 23rd day of Panguni. The festival concludes on the 25th day of Panguni after celebrating Devasthana Theerthavari. Archana is performed at the same time for Moolavar and Urchavar ay different locations. This is a speciality in this shrine. Muthumariamman koil car festival and Pongal day are the important events. 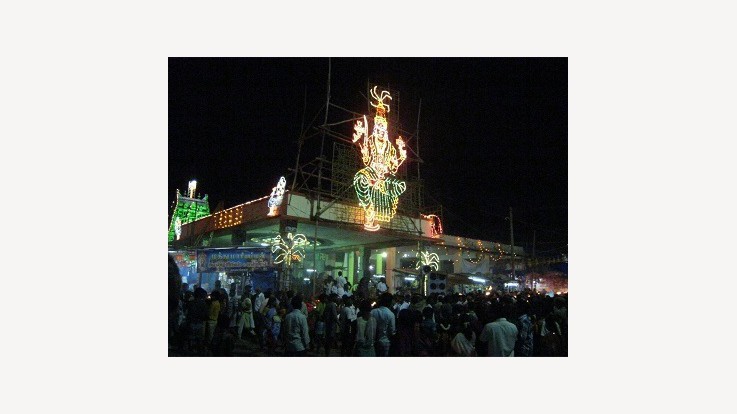 Kappu Kattudhal is also known as announcing or inauguration ceremony of upcoming festival. Till the conclusion of the festival, the residents cannot leave the place. It is mandatory to witness the spectacular show of the God and Goddess.

Procession with milk pots is carried out during theerthavari, pookuzhi or fire pit festival and Navaratri.

In the month of Aadi (July-August) and Thai (January-February), abhishek with 108 pots of milk and special offerings are made in the temple.

Apart from these festivals, Adi Pooja, Navratri and Rahu Kalam festival are celebrated in grand manner.

By Road: From Mattuthavani bus stand, frequent bus services are available. The distance between Madurai to Thayamangalam is 67 kms. Thayamangalam temple is 25Kms from Sivagangai, 22kms from Manamadurai and 27 kms from Paramakudi. Parthibanur, Kamuthy, Kalaiyarkoil, Ilayangudi and Aruppukottai are connected to Thayamangalam with road network. Every year, during the festivities, Tamilnadu Transport Corporation ferry special buses from various places to Thayamangalam.

By Train: The nearby railway stations are Paramakudi, Manamadurai and Sivaganga, from where one can take a taxi or bus to reach this temple.

By Air: Madurai international airport is handy to this temple.