Lingaraja temple is situated in Bhubaneswar, Orissa. This temple is dedicated to the form of Shiva, called as Harihara. The Lingaraja Temple is one of the few ancient temples in the city of Bhubaneswar. It depicts the rich legacy of Indian culture and traditions. It is a place of worship which follows a very strict pattern of following the rituals. This temple was constructed in the 11th century by Jajati Keshari, a Somavanshi king. This temple is built in the traditional Kalinga style of architecture. The temple comprises of four main segments: the vimana (the structure which contains the sanctum), the bhoga-mandapa (the hall of offerings), the Nata Mandira (the festival hall) and the Jaga-Mohana (the assembly hall). The temple is mostly built with laterite and sandstone, and displays impressive carvings of beast and man. Thousands of devotees visit temple in Falgun to celebrate Shivaratri festival. 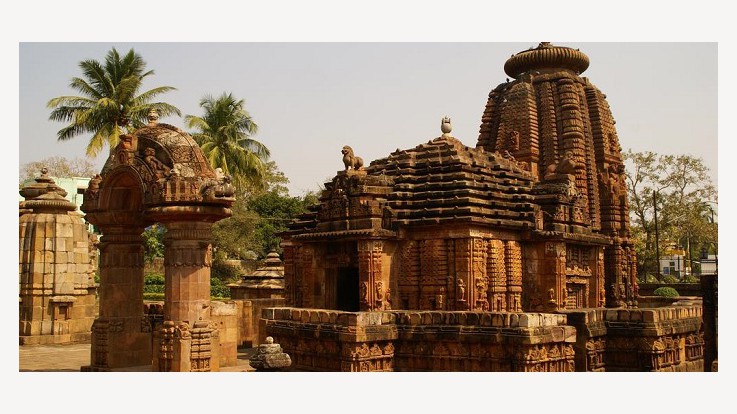 HistoryThe temple was built in eleventh century but was completed later by Jajati Keshri. He dedicated this temple to Lord Shiva. The word “Linga” means the phallic form of Lord Shiva. This temple is also referred in the Brahma Purana, a Hindu scripture. It is not less than 1000 years. However, there are many parts that claims to be acknowledged in the 6th century. Lingaraja Temple is dedicated to Lord Shiva, who is considered as the destroyer as per the Hindu thoughts. It is said that when the construction of Lingaraj Temple was about to complete, the Jagannath cult started growing. This belief is further empowered with the fact that Lord Vishnu and Lord Shiva are worshipped here. 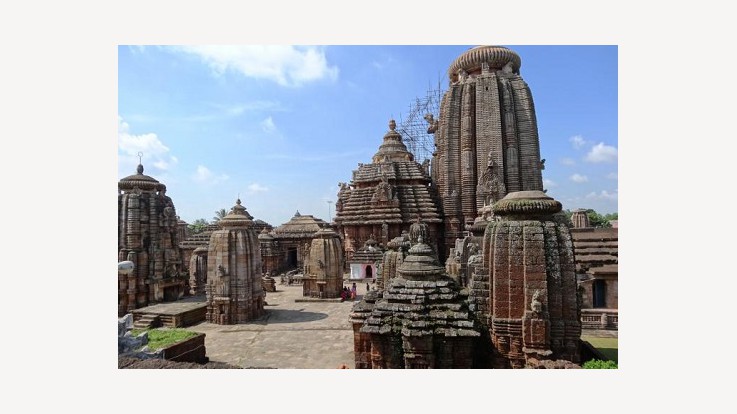 ArchitectureThe magnificent structure of the temple resembles the Kalinga style of architecture. It is built of the darkest shade of the red sandstone.The complex of the temple is very huge. The tall spire of the temple extends to the height of 55 meters. The spacious courtyard comprises 50 small shrines that are dedicated to several Gods of the Hindu religion.

Actually, the temple is divided into four parts, the Garbh-Griha, the Yajna Shala, the Bhoga Mandap and the NatyaShala respectively. In the GarbhGriha (Sanctum Sanctorum), the lingam of Lord Shiva is regarded as 'Swayambhu' (Self-originated) and it is worshiped as both Lord Shiva and Lord Vishnu. On the main entrance, one can see a trident (Lord Shiva) and Chakra (Lord Vishnu) on the either side of the door. The concord of the two sects can be seen here, where the deity is worshiped as Hari-Hara. The term 'Hari' refers to Lord Vishnu and 'Hara' refers to Lord Shiva. An underground river originating from the Lingaraj temple fills the Bindusagar Tank and water believed to heal physical and spiritual illness. 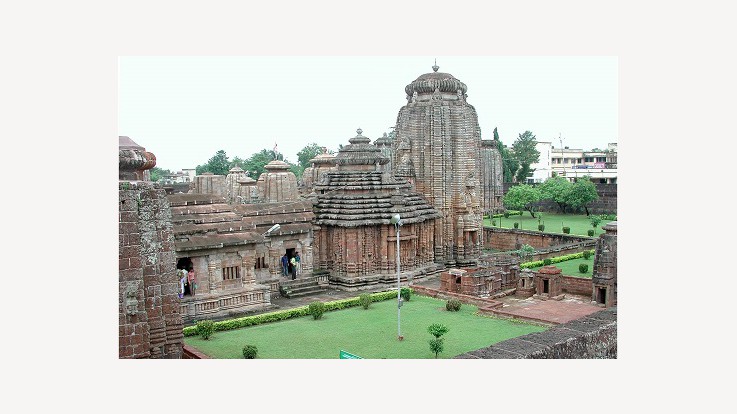 The 'Lingam' is bathed with water, milk and bhang every day. Apart from GarbhGriha, the 'NataMandir' provides a hint for its close alliance with the devadasi tradition. Besides the Lingam, the parsvadevta adores the site, where Lord Ganesha, Lord Kartikay and Goddess Parvati are placed in different directions. All the images are huge and present an excellent workmanship of the artists. The images are festooned with rich draperies and ornaments.This magnificent temple attracts thousands of devotees and pilgrims to its doorstep every year. The spiritual ecstasy offered by the temple is worth feeling for once.

Devotees can visit temple in between 5Am to 9Pm.

How to reach Lingraja Temple

Air – Bhubaneshwar airport is well connected with all major cities.

Road – Temple is well connected with all parts of Bhubaneshwar city.

There are hundreds of hotels both budget and luxury class for all kinds of visitors. The best time to visit is in falgun MahaShivratri festival. There are both Government and corporate guest houses available as well. Several lodges and dharmasala are available at a very affordable price. Food is multi cuisine and very affordable for all kinds of visitors.