The Temples at Sringeri in the Chikmagalur district of the South Indian state Karnataka is one of the Advaitha Mathas established by Jagadguru Adi Shankaracharya. Sringeri, a small town on Sahyadri Hills in the Western Ghats of Karnataka lusted with greenery is a pleasant pilgrimage to visit. The Sringeri temple complex houses Vidyashankara Temple and the Sharada Peetham on the banks of the River Tungabhadra.

The Vidyashankara temple was built in around 1338A.D by Vidyaranya in memory of his Guru Vidyashankara or Vidyathirtha, by the support of Vijayanagara Rulers. Also, Vidyaranya was the Head of Sringeri Sharada Peetham from 1331AD to 1386AD who played a key role to establish the Vijayanagara Empire against the Muslim invaders from North India.

The Sringeri Sharada Peetham, adjacent to Vidyashankara temple, was initially established by Adi Shankaracharya in the 8TH century and had installed a sandalwood idol of Goddess Sharada along with a Sri Chakra in front of her. However, later due to destruction by Muslim invaders, the broken idol was replaced with a Gold Idol of Goddess Sharada by Vijayanagara Rulers.

The Vidyashankara temple built on the Samadhi of Vidyashankara is an admirable monument made entirely of carved stone resembling the architectural style of Hoysalas and Dravidians. The temple structure stands on a high plinth featuring sculptures of the Hindu gods and various scenes of Hindu mythology all over the outer wall. Also, the sculptures of animals like elephant, lion and horses are carved on the bottom sides of the temple. In addition, the rear side of the temple composes sculptures of Lord Vishnu’s incarnations, the Dashavataras. The Vijayanagara Emperors influenced by Vidyaranya, have made great contributions to the temple structures. 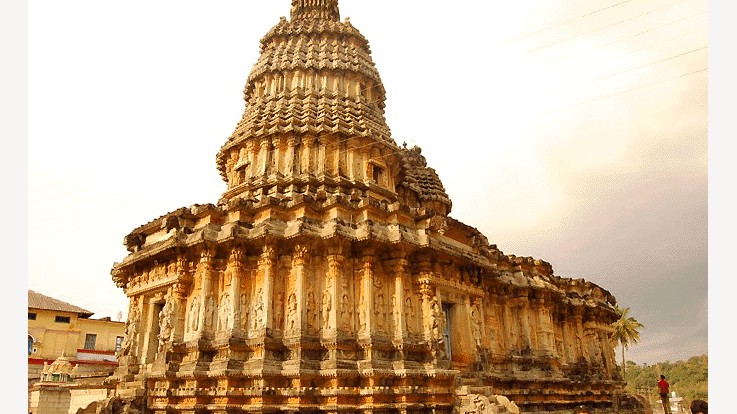 There are six doorways leading to the temple and marvelously carved twelve pillars known as Zodiac or Raashi pillars in the temple hall. Each pillar composes a roaring lion with a rolling stone ball in its mouth. The pillars marked with their corresponding Zodiac sign, are arranged in such a manner that the sun’s rays fall on the pillar in order of the twelve solar month. A large elevated circle is marked with converging lines on the flooring that indicates the direction of the shadows from the zodiac pillar. In addition to this, the ceiling is carved extraordinarily with lotus and parrots sculptures.

Entering into the temple on the west side, the main sanctum or Garbhagriha houses Vidya Ganapathy on one side and Goddess Durga on the other side. Shrines of Brahma, Vishnu and Maheshwara with their consorts house in the main sanctum. Lord Shiva’s idol is installed on the Samadhi facing towards East. Above the Garbhagriha, there is a magnificent vimana and the external roof is made up of a sloping structural slab.

A lot of fishes are found in the River Tungabhadra that comes over the edge of the river, where the visitors feed them with puffed rice. These sacred fishes are not supposed to be caught.

Every year, Vidyatirtha Rathotsava is celebrated grandly during Kartika Shukla paksha. Also, Navaratri Festival is celebrated in the Sharada Peetham.

How to reach here:

Sringeri being a well-known pilgrimage spot is connected by road to most places like Mangalore, Udupi and Chikmagalur. The nearest Railway-Station is Birur and the nearest airport is the Mangalore Airport.

The best time to visit is between October and March and better to avoid visiting during rainy time.