Triyuginarayan Temple is nestled in Triyuginarayan village of Rudraprayag district in Uttarakhand. The uniqueness of this ancient temple is that devotees can worship Lord Vishnu, Lord Shiva and Goddess Parvathi at one place. This is the place where Lord Shiva married Goddess Parvathi in Treta Yug. This marriage was witnessed by Lord Vishnu and Lord Brahma. Thus, this occasion saw the presence of the trinity of Hindu gods Brahma, Vishnu, Mahesh. Hence, the temple acquired the name, Triyuginarayan Temple. The unique feature of this temple is a perpetual fire, in front of the temple. The flame is burning since the times of the divine marriage of Lord Shiva and Parvati. Hence, the temple is also known as Akhand Dhuni temple. The temple also houses the idols of Lord Hanuman, Lord Vinayaka, Garuda and Annapurna Devi. The temple complex has four Kunds filled with fresh water stream in which devotees wash their feet before entering the temple. 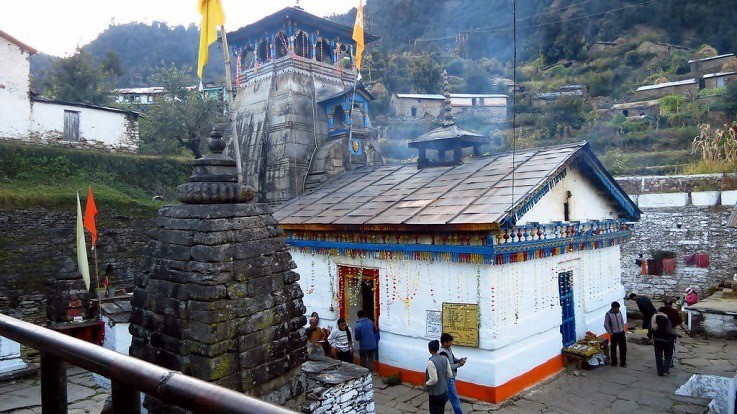 The word Triyugi Narayan" literally translates as "Tri" means three, "Yugi" denotes the time period or Yuga and "Narayan" means Lord Vishnu. Triyuginarayan temple resembles Kedarnath shrine in architectural style. The present shrine is believed to have been built by Adi Shankaracharya. The shrine houses 2 ft silver image of Lord Vishnu along with his consort - Goddess Lakshmi and Goddess Saraswati. In front of the temple, the Havana-Kund with the eternal flame - the witness of the wedding of Shiva and Parvati - is situated. Devotees add samidha to the flame and collect the ashes to promote conjugal bliss. A stone named Brahma Shila in front of the temple is regarded as the spot of the divine marriage. The temple has three Kunds. A water stream Saraswati Ganga originates in the courtyard of the temple which fills these holy ponds. 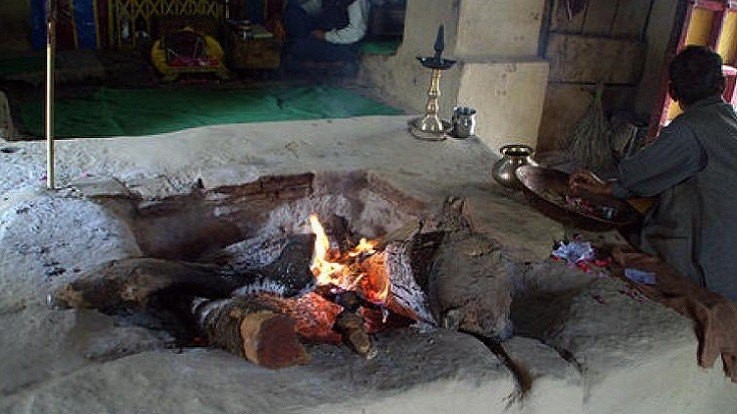 According to Hindu mythology, Sati took rebirth as Goddess Parvati, the daughter of Himavat. Parvati initially tried to allure Lord Shiva by her beauty. Finally, she won Lord Shiva by practicing rigorous penance at Gauri Kund, which is 5 km away from Triyuginarayan. After that, Lord Shiva proposed to Parvati at Guptakashi before they got married in Triyuginarayan village. Lord Vishnu formalized the wedding and acted as Parvati's brother in the ceremonies, while Lord Brahma acted as the priest of the wedding, which was witnessed by all the sages. The importance of this place is mentioned in a Sthala-Purana. Before the marriage ceremony, the Gods are believed to have taken a bath in three Kunds namely, Rudra-Kund, Vishnu-Kund and Brahma-Kund. The inflow into the three kunds is from the Saraswati-Kund, which has originated from Vishnu's navel. Hence, the water of these kunds is considered to cure infertility. 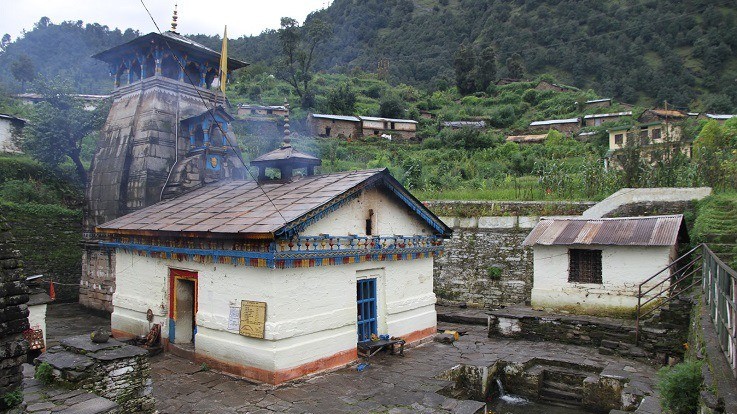 The festival of Navratri is celebrated in a grand manner by locals in this temple. The festival takes place for two weeks and many special rituals and ceremonies are conducted here.

By Air: The nearest airport is Jolly Grant (244 km) which is located at Dehradun.

By Train: Rishikesh (261 km) is the nearest railway station.

By Road: The temple is 12 km away from Sonprayag. Sonprayag is well-connected by road. The Triguninarayan temple is also accessed by trekking.