The Vaishno Devi temple is a shrine residing in a holy cave at a three peaked mountain named Trikuta of Jammu and Kashmir. Considered to be one of the holiest pilgrimages attracting thousands of tourists, there is a strong belief that the Mata Devi fulfills the wishes of all her children visiting her. The Holy cave is at an altitude of 5200 feet and the visitors have to trek the mountain for about 12km to reach there from the base camp at Katra.

There are no idols or statues inside the temple but the Goddesses are in the form of three natural rock formations called as Pindies. The Vaishno Devi is considered as the incarnation of these three Devis, Maha Kali, Maha Lakshmi and MahaSaraswati. Also, the entire rock is submerged in water on a marble platform all around. The specialty of this cave temple is that although the three Holy Pindies originate from a single rock, they distinctly differ from each other both in color and texture. 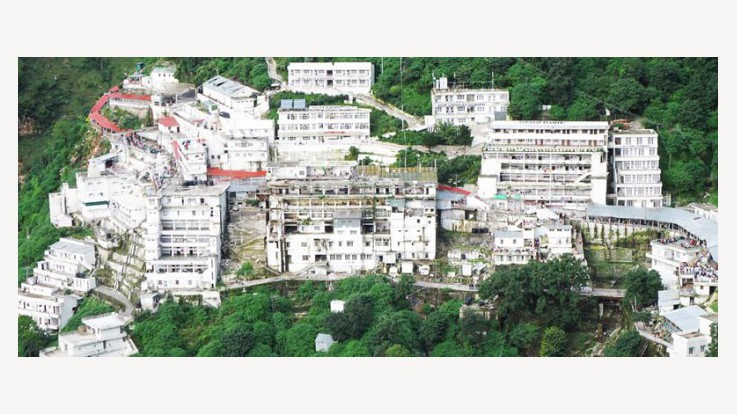 Though the history of Vaishno Devi temple is not known exactly, the epic Mahabharata has details of the Goddess. It is mentioned that Arjun, warrior of Pandavs, mediated to Vaishno Devi and pursued her blessings to win the battle. Later Pandavs are believed to build the temples at Bhawan.

As per the history, Pandit Sridhar, upon the guidance of Mata discovered the holy cave at Trikuta Mountain about 700 years back. Vaishno Mata had appeared in all her glory to him and blessed him with four sons. She asked him to spread the glory of the holy place all over and he spent his entire life in providing his services to Mata Devi.

According to the legend, the shrine is believed to be the holiest as the Mata’s right arm had fallen here while the other belief is that the skull of Mata had fallen here. The other story says that, the three Pindies, got together to form a spiritual strength leading to the emergence of a beautiful girl. The three Pindies then guided her to live on earth in upholding the righteousness of her devotees. The actual story is though very ascertained.

The Bhawan housing the holy cave can be experienced 1.5km before reaching the point. However, the path to the Holy shrine at the Bhawan is very attractive as it is filled with photographs describing the nature of Darshan inside the cave.

The three Pindies inside the 98 feet long Holy cave are residing in an order from left to right as, Mata Mahakali, center of Mata Vaishno Devi (Mata Mahalakshmi), and finally Mata Saraswati. The other deities are Lord Ganesh at the entrance; adjacent to it are God Surya and God Chandra Dev, symbol of Lord Hanuman. Inside the cave one can come across the holy river flowing from the feet of Mata, Charan Ganga.  The roof of the entire cave rests on innumerable heads of Shesh Nag. The symbols of Pandavs, Sapt Rishis, divine cow Kamdhenu, Brahma-Vishnu-Mahesh and Shiva Parvathi are embraced on the ceiling of the cave. 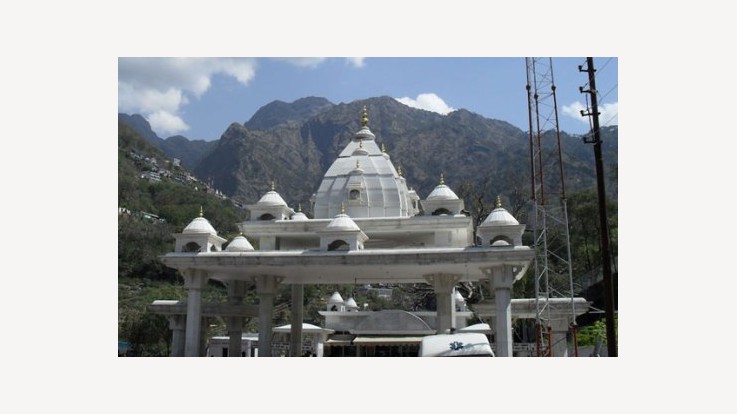 Entrance Gate from where the journey starts

One can visit the temple throughout the year and round the clock. It is better to avoid visiting during the winter due to heavy snowfall. The Aarti to the Goddess is performed twice a day, one before the sunrise and the other after the sunset.Since 1986 the temple is managed by Shri Mata Vaishno Devi Shrine Board commonly known as Shrine Board. The offerings and donations are utilized by Shrine Board to improve the facilities for tourists. 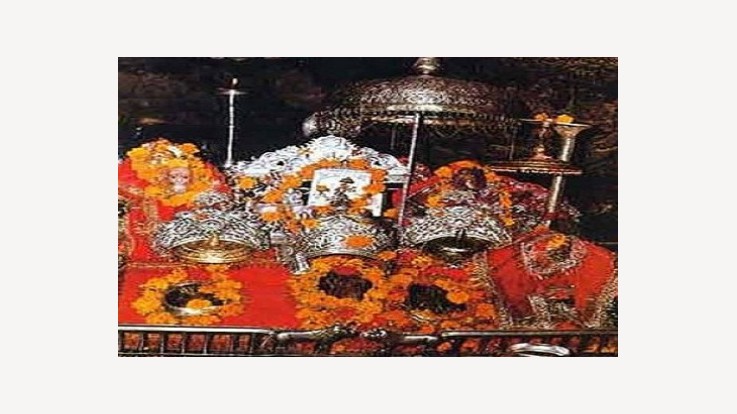 By Air :-Located at a distance of 50 kilometres, the Jammu airport is the nearest to Katra. Jammu is well-connected with major airports in India. It’s easy to get a cab from the Jammu airport to Katra as regular taxi and cab services are available.

Accommodation:-Hotels,rooms and rest rooms are available at reasonable costs near the temple.Online booking facility is also available.