Dedicated to the Goddess Vajreshvari also known as the Goddess of Lightening, Vajreshwari Devi temple is nestled in Nagarkot town of the Kangra district in Himachal Pradesh. The temple is built according to the Shikhara architecture and it is believed that Vajreshwari temple is more than 1000 years old. The main entrance of the temple has a Nagarkhana or drum house. The temple is surrounded by a stone wall which resembles a fort. It overlooks the Kangra Fort and Chamunda Devi Temple. Inside the main shrine, Goddess Vajreshvari is worshiped in the form of Pindi. The temple also has a small shrine of Lord Bhairav. The temple also houses an idol of Dhayanu Bhagat who had offered his head to the Goddess. The present temple structure has three tombs which are a unique feature. 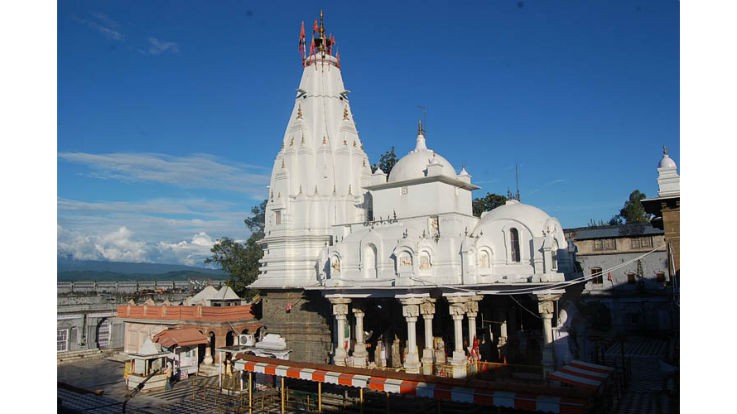 Originally, this temple was built by the Pandavas during the time of Mahabharata. It is said that Goddess Durga appeared in their dream and she told them that her idol is buried at the Nagarkot village and if Pandavas want themselves to be protected they should build a temple for Goddess at that area else they will be destroyed. Later, a temple was established by Pandavas according to the direction of Goddess Durga in Nagarkot village.

Vajreshwari temple was looted many times by the Muslim invaders. Gaznavi looted Vajreshwari temple at least 5 times. In the ancient era, the temple used to contain tonnes of gold and many bells made of pure silver. The temple was destroyed by a powerful earthquake in 1905 and it was subsequently rebuilt by the state government. 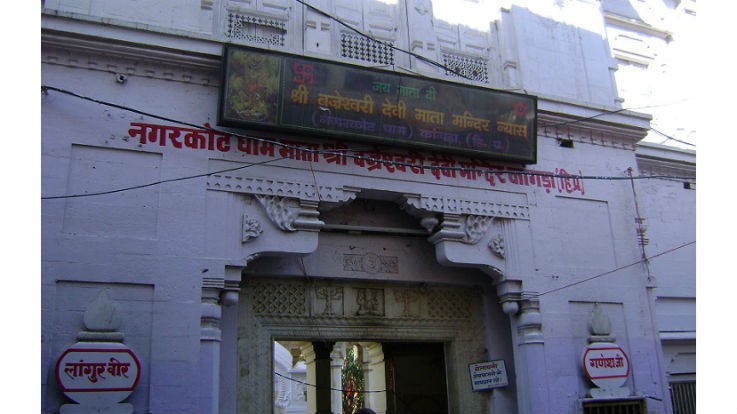 A legend says that after Goddess Sati immolated herself in the honor of Lord Shiva in the Yagya ceremony which was held at her father’s place, Lord Shiva carried her body on his shoulder and performed Tandav. In order to pacify Lord Shiva and stop him from destroying the world, Lord Vishnu chopped the body of Sati into 51 parts with his Sudarshan Chakra. The left breast of Sati was dropped at this site, thus making it a sacred place or Shakti Peeth.

The festivals of Makar Sankranti, Deepawali, Holi, Kojagiri Poornima, Datta Jayanti and Hanuman Jayanti are celebrated in the temple. As per the legend, while killing Mahishasura Goddess had got some injuries. To heal the injuries Goddess had applied Makhan (butter) on her body. To mark this day, a festival is celebrated for seven days in the temple where the Pindi of Goddess is covered with Makhan. The temple is best known for its Navratri celebrations. A huge fair is also organized as reverence to Goddess on Amavasya in the month of Chaitra. Next day, a ceremonial event with a procession carrying an idol of Goddess Durga in a Palki is observed.

By Air: The nearest airport is located at Gaggal which is 8 km away from Kangra.

By Rail: The nearest railway station is Kangra (11 km).

By Road: Buses and other private vehicles are available to access Vajreshwari Devi temple from various towns of Himachal Pradesh.