Kapil Muni Tirth, also known as Kalayat brick temple complex is the oldest surviving brick temple which stands at Kalayat town in Kaithal district of Haryana. The temple complex comprises of several Hindu shrines along with two ancient temples which date back to the 7th century. This temple is an important part in the series of 48 kos parikrama around the holy city of Kurukshetra. The temple was built by king Salwan.

Tirth History:These temples were built as per the Nagara style of Gurjar Pratihara architecture with typical curvilinear spire. The design of the temple edifice reveals that initially there were five temples in the Panchayatan group on the banks of holy Kapilayatna Tirtha. In the Panchayatan type of structure, the main temple is enclosed by four subsidiary shrines. The temple edifice and sculptures have been constructed out of locally available red bricks. The bricks used in the construction were moulded and of different shapes and sizes. Moulded bricks were also used for various decorative parts of the façade. These temples were built without using any plaster or mortar. Currently, only two temples can be seen. One temple is a Shiva temple which is built according to the Pancha Rathasarchitecture. The temple houses a Shiva Linga along with the snake statue. There are stairs at the back of the temple which leads to the Kapil Muni Tirtha. Here, devotees take a holy dip before worship. The temple complex also houses a tirtha pond called Chyavan Giri Kund which is named after a Vedic sage Chyavana. A temple of Katyayini devi is also seen. She was a daughter of Sanskrit grammarian, mathematician and Vedic Sage Kātyāyana. A shrine of Lord Hanuman along with an Akhara can also be seen in the temple premises. 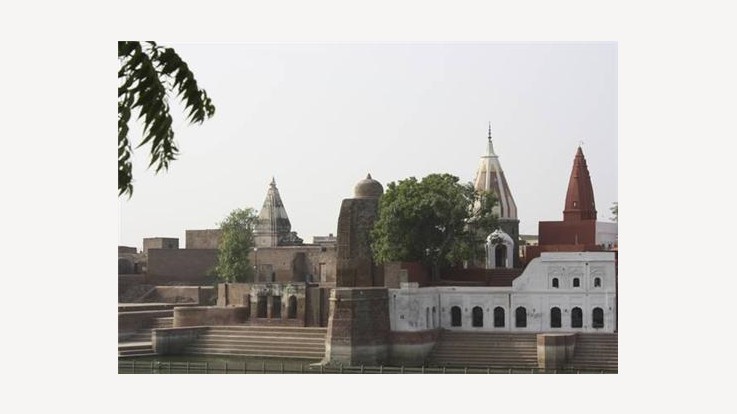 Formerly, Kapil Muni Tirth was known as Kapilayatana or home of the sage Kapil. Sage Kapil was a proponent of dualistic Samkhya philosophy of Bhagavata Purana. It is a sacred, historical, ancient and religious place. The brick temples were established and sculptured in the reign of Satavahana dynasty during 230 BCE - 220 CE. A legend has it that after Kapil Muni's demise, a king of Satavahana dynasty came to hunt in the forest near the abode of Kapil Muni. He was suffering from an ailment that would make him paralytic during night. While hunting one of his arrows hit the ground. As he pulled the arrow out, the mud got stuck on his finger. Later, he found that this mud cured his fingers. Hence, he ordered a Tirth lake to be dug so that people suffering from such ailments could be cured with holy mud. Later, he also constructed the five brick temples at the same site.

By Air: Kapil Muni Tirth can be reached from Chandigarh airport which is the nearest airport to Kalayat and is located about 138 km away. Delhi airport is located at about 150 km away.

By Train: Chandigarh is the nearest railway station to the temple.

By Road: Buses and private vehicles are available from all the major cities of Haryana to reach the temple.