Shiv Mandir of Ambarnath is also known the Ambreshwar Shiva Temple. It is situated at Ambarnath town, near Mumbai, Maharashtra. The temple was constructed in 1060 AD by Shilahara king Chhittaraja. Later, his son Mummuni rebuilt the temple. Some locals also believe that the temple was built by the Pandava brothers in just one night out of a massive single piece of stone. Lord Shiva is the presiding deity of the temple which appears in the form of a Linga in the sanctum as well as Harihara idol. There is no roof over the sanctum. Hence, the deity is exposed to the sky.

Shiv temple stands on the bank of Vadavan (Waldhuni) river. The temple is designed according to Hemadpanthi-style and is beautifully carved on stones. To reach the sanctum sanctorum, one has to climb down 20 steps from the main hall. The Linga is located at the centre of underground sanctum under an open sky. Guru Nanak visited the temple sometime around 1415. 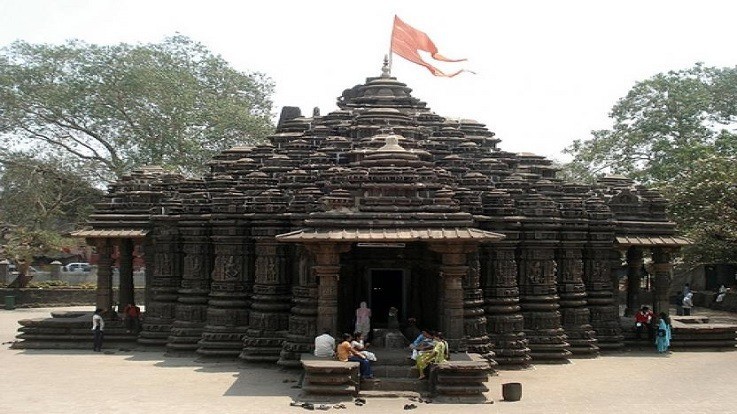 Temple view from the front

Ambreshwar Shiv temple has exquisite architectural works. The temple was constructed 1000 years ago, and it features two notable representations of Lord Brahma. An amazingly beautiful sculpture of Lord Brahmadeva is carved on the outer wall. A rare idol of Hari-Hara-Pitamaha-Surya is also seen in the temple, in which Lord Shiva, Lord Vishnu, Lord Brahma and Sun God are portrayed together as a single deity. 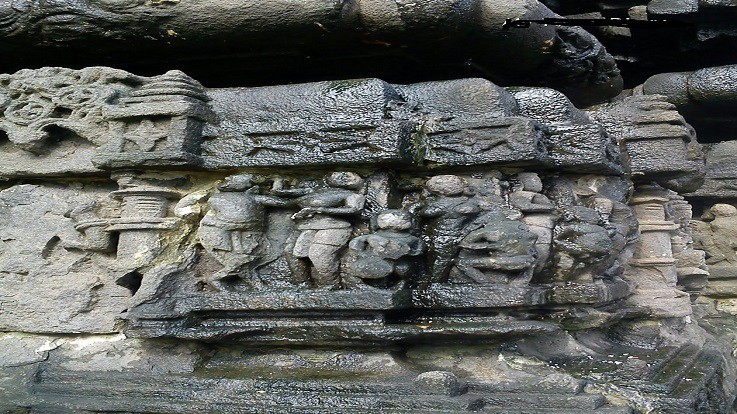 A view of the magnificent carvings

Ambreshwar Shiv temple is locally known as the Puratana Shivalaya. The word ‘Ambernath’ translates as 'the king of the sky.' Ambarnath Shivalaya is constructed out of local black stone and lime. This category of the temple is a subset of the Vesara style, a combination of Nagara and Dravidian architecture. The Ambarnath temple is frequently compared to the famous Delawara temples of Mount Abu, for their similar design and ornamentation. The temple is heavily ornamented and replete with excellent sculptural works. The large wall surface accommodates many sculptures and other decorations. A predominantly Shaivite theme carvings form a chain around the temple exterior. Even the ceiling has richly carved details.

A grand fair is held on the occasion of Maha Shivaratri which is visited by thousands of devotees. Maha Shivaratri fair lasts for 3–4 days. On the day of Maha Shivaratri, the eastern part of Ambernath is blocked for vehicles due to a heavy flow of pilgrims. The temple becomes overcrowded in the month of Shravana.

By Road: Regular buses and private vehicles are available from different places of Maharashtra to Ambarnath.

By Air: The nearby airport is located at Mumbai.

By Train: The temple is only 2 km away from the Ambarnath Railway Station.