Annaprashan Puja Ritual:After consulting a priest, Annaprashan ceremony is performed on an auspicious day and time. The baby is dressed in new traditional clothes. Annaprashan ceremony starts with a puja and a havan for baby's good health, prosperity and happiness. The puja ceremony is followed by a symbolic feeding of the prasad as the first morsel of solid food. Family and friends are invited to celebrate the occasion of Annaprashan. The religious ceremony is often followed by a ritual where various symbolic objects are kept on a banana leaf or on a silver tray. These objects include books which symbolize learning, a pen which symbolize wisdom, money which symbolize wealth, and food items which symbolize a love for food. Family and friends have fun seeing the little baby making choice. It is believed that the object baby chooses from the tray represents baby’s area of interest. A variety of food is served on the baby's plate. Prasad is made up of rice pudding (kheer or payash) or mashed plain rice with ghee and some well-cooked dal. 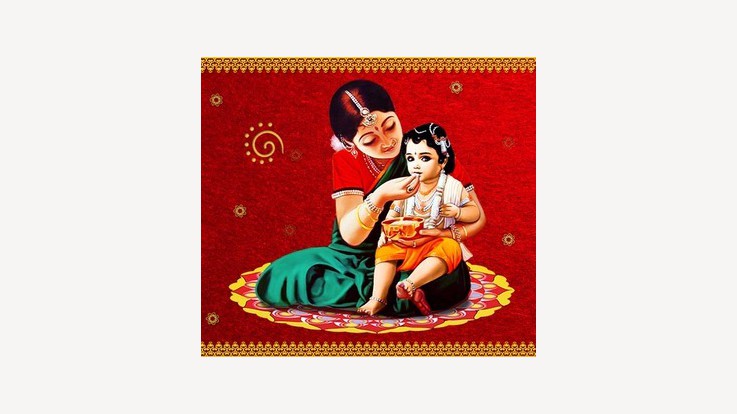 Significance and Benefits of Annaprashan PujaAnnaprashan ceremony cleanses the baby of things that he may have swallowed when the baby was in the uterus, helps in knowing regarding the kid’s inclination towards his interest, showers prosperity, increases the life span of a baby, protects the child and brings happiness and long life.

The aim of Annaprashan Sanskar is showing the sense of purity and it is performed for healthy growth and strength of the body. It teaches the importance of piousness of food. Scriptures say, if you eat pious food your mind will be pious. Food is not for the taste but for health and growth of the body as well as the mind. Gods and Goddesses are first invoked and offered the food before feeding the child. The prayers are offered to gratify all the senses of the child so that he may live a happy and contented life. The idea is to bless the kid with prosperity and may always find contentment.