Bhadrakali is one of the powerful forms of Great Goddess Parvati or Devi as mentioned in the popular stories related to Devi. The Sanskrit meaning of Bhadra means the one who is full of blessings and good fortune and prosperity. Maha Maya Bhadrakali is the most popular form of Devi worshipped before the war by Rajputs and for black magics.

Appearance and Power of Maa Bhadrakali:It is been said that Goddess Bhadrakali has aroused from The North and has three eyes and thus she is worshipped in the form of an idol that depicts the similar nature. The worshipper of Shiva is often seen paying their respect to Bhadrakali as she is taken the form for Lord Shiva. She carried lots of weapons that carries the power of many god and goddess including Shiva, Vishnu, and Brahma for defense.

Legend behind Goddess BhardraKali:Bhadrakali is considered to be a form of Goddess Parvathi who is the respectful wife of Lord Shiva in his Rudra form and it is also said in Puranas and mythology that Bhadrakali is the form of Parvathi taken to calm down Shiva when he takes the form of ViraBhadra. According to the Vayu Purana and the stories from Mahabharata, When Daksha, the demon insulted Lord Shiva during the Great Ashwamedha Yagna, Sati unable to bear the trauma sacrificed her life by falling into the pyre. When Shiva learnt about this, he took the form of ViraBhadra and to add to his power, Goddess Parvathi took the form of Maha Maya Bhadrakali.

There is another story that goes back to Darika who secured a boon from Lord Brahma that he would be excused from any type of death and he would remain unharmed by any form of death and destruction from a man. When the boon was granted, he started harassing and taking over the world and when Lord Shiva learnt about this, he created the Goddess Bhadrakali to kill the demon and gain the victory and peace over the world. He opened his fiery third eye from which the Goddess Bhadrakali appeared to destroy Darika and she sought the help of bloodthirsty ghosts and spirits who hail there. She successfully assassinated Darika as his boon did not say that he cannot be killed by a woman. She returns Kailash by holding the head of Darika. 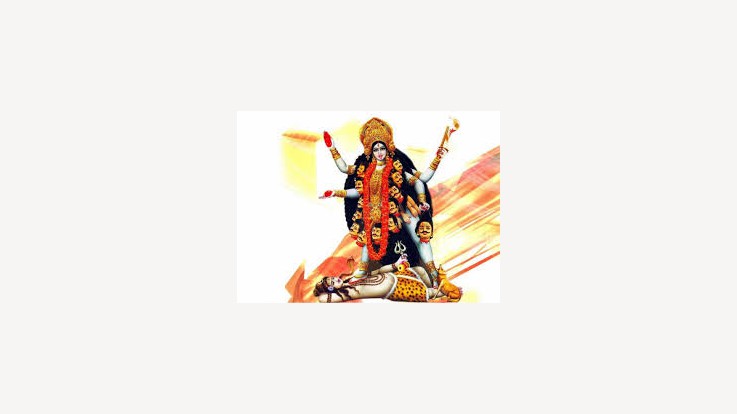 Mantra to be chanted related to Bhadrakali;

(The mantra is chanted for the prosperity, fortune and good health of the people and the world. Let there be elimination of negativity and positive vibes remain all over making this a beautiful place to live in).