How did the story originate?At the end of Satya yug, the world was destroyed by a flood. Lord Vishnu, being the creator aimed towards saving the world from destruction. This incarnation is the first incarnation of the God. 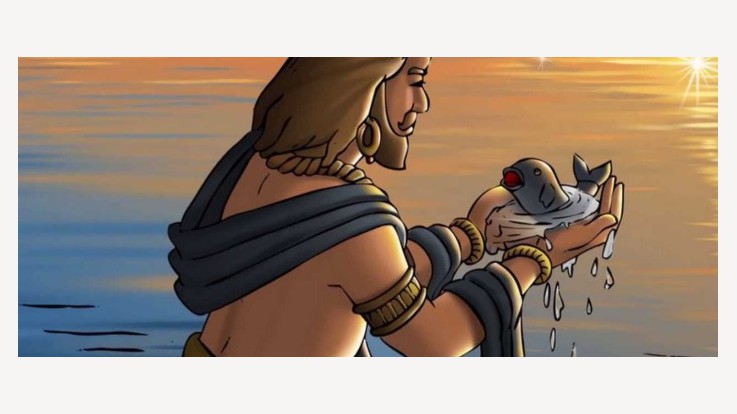 The King & the Fish

How is the incarnation represented?The Matsya Avatar is represented by a four-armed figure. The upper part depicts the body of the fish. The incarnation had four arms. Two arms held a wheel and the conch shell well known as shank. The other two hold a lotus or mace to give protection and boon to the world.

Legend Behind the Matsya Avatar:-In the Sat yug, a king named Taramasalata existed. He ruled the kingdom of the Dravidian during the ancient times. He was also known as Mani, who was an ardent devotee of Lord Vishnu. One day Taramasalata was washing his hands in the river, suddenly a small fish swam onto his hands pleading him to save his life. Considering the request the king placed the fish into a small jar. The fish started to grow. Seeing it outgrow the size of the jar the king moved it to the tank then a  river and then to the ocean to save it. Lord Vishnu who was in disguise of the fish came into his true form and told the king that a flood would occur to destroy the world in the next seven days. 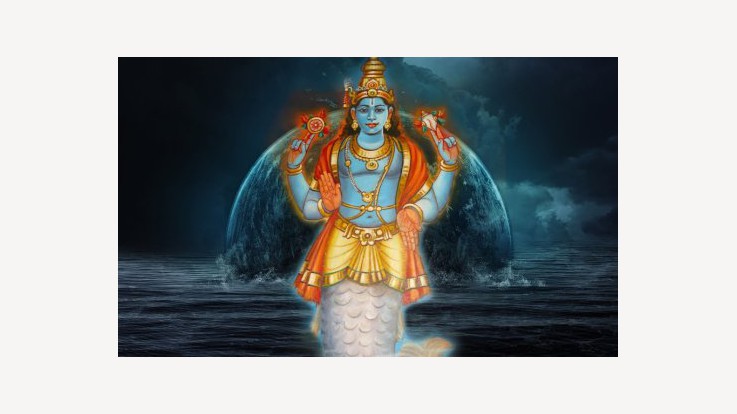 The Lord asked the King to collect seeds, herbs, animals and to assemble the Maharishis at one place. He also advised the king to collect the flora and fauna present on the earth in one boat. Lord Vishnu promised to meet him at a stipulated time. The boat was taken away by the Matsya Avatar of Lord Vishnu. He tied a horn manifested on his head.

The huge flood occurred destroying the earth, but Mani, the King and his wife and other species were saved. The destruction stopped after a few years and the boat was safely brought back on the land. The king and the queen started life on the earth using various species and brought back life on the earth.

Another Legend mentioned in the Baghdad Puritan says that a demon named Hagiography stole away Vedas from Lord Brahma. He took away the Vedas when Lord Brahma was deep inside the ocean. In order to save the world, Lord Vishnu turned into a Matsya to save the world from destruction.