Jambavan is a King of the Bears. In several ancient scriptures, he is also described as a monkey. He is mentioned as Kapishreshtha (Foremost among the monkeys) and other epithets. He is known as a bear (King of the bears). He was created by Lord Brahma, to assist Lord Ram in his battle against demon King Ravana. Jambavan was present during the churning of the ocean. He was supposed to have circled Vamana seven times when he was acquiring the three worlds from Mahabali. Jamthun village in Ratlam district of Madhya Pradesh has traces of ancient habitation. It is known as the city of Jamvanta or Jamvanta Nagari. Jambavan is also known as Jamvanta, Jambavat, Jambavantha or Jambuvan. He is believed to be immortal and is the son of Lord Brahma. He was the King of the Himalaya who had incarnated as a bear to serve Rama. He had received a boon from Lord Ram that he would have a long life and the strength of ten million lions. 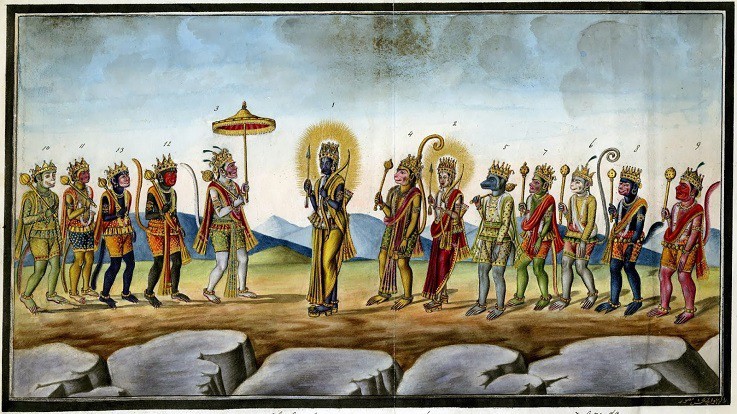 In Ramayan, Jambavan was very experienced and intelligent. He had a good knowledge of running a kingdom. He was the one among Sugriva’s advisers. Jambavan advised King Sugriva to send Hanuman to identify Ram and Lakshman, to find out who they were and what their purpose was. Jambavan helped Ram to find his Goddess Sita and fight her abductor, Ravana. He was instrumental in making Hanuman realize his immense capabilities and encouraged him to fly across the ocean to search for Sita.

Jambavan mentions two past incidents of his life in the Ramayana. Once at the foot of Mount Mahendra, where Hanuman was about to leap, Jambavan told him that he too could have jumped over the ocean to Lanka. But he got injured when he was beating the drum for Lord Vishnu during the Vamana incarnation when Lord Vishnu measured the three worlds, his shoulder struck Jambavan, and he got injured which limited his mobility.

During the Samudra-Manthan, where he was also present at the event. He got to know about the disease-curing plant Vishalyakarni from the gods. Later, he used this information and conveyed it to Hanuman to help an injured Laxmana who was rendered unconscious by Indrajit.

During a duel with Ravana, Jambavan gave Ravana powerful punches with his hands and finally kicked him on his chest, knocking Ravana unconscious and making him fall in his chariot. As a result, the charioteer withdrew Ravana from the battle.

In the Mahabharat, Jambavan had killed a lion, who had acquired a gem called Syamantaka from Prasena after slaying him. Lord Krishna followed Jambavan to his cave, and a fight ensued. After eighteen days, realizing who Krishna was, Jambavan gave the gem to Lord Krishna and also married off his daughter Jambavati to him, who became one of Krishna's wives.