Lord Rama in due respect of his father’s boon, left Ayodhya and went into forest for fourteen years of exile along with wife Sita and brother Lakshmana.Once during his exile years, it happened that Rama reached the banks of Ganga River. However, he needed a boat to cross the river and requested a boatman, named Kevat, nearby to help them cross the river. Kevat instantly refused, keeping in mind (Rama Leela’s) the incident where Ahalya’s curse was removed by just a touch of Rama’s feet and she turned from stone into a woman.

Kevat said to Rama knowing the fact about the power of his feet and said that ‘There is some magic in the dust from Rama’s feet that made a stone transform into a beautiful woman’ and the dust in his feet may sink Kevat’s boat rendering him a loss. So he placed a condition that ‘only if Rama allowed him to dust and then wash them well. And collect the water and then drink it. If his magic doesn’t influence him then he would allow a seat in his boat and help him cross the river’. Lord Rama with a gentle smile agreed to allow Kevat wash his feet.

Kevat happily washed Lord Rama’s feet with his simple procedure. Kevat’s selfless devotion towards Rama made him able to accomplish what great sages couldn’t achieve for years long. He ferried them across the Ganga and Sita offered him a ring for his service. Kevat rejected it and said that Rama would bless and ferry him the ocean of life when the time comes. Rama embraced Kevat and blessed him. 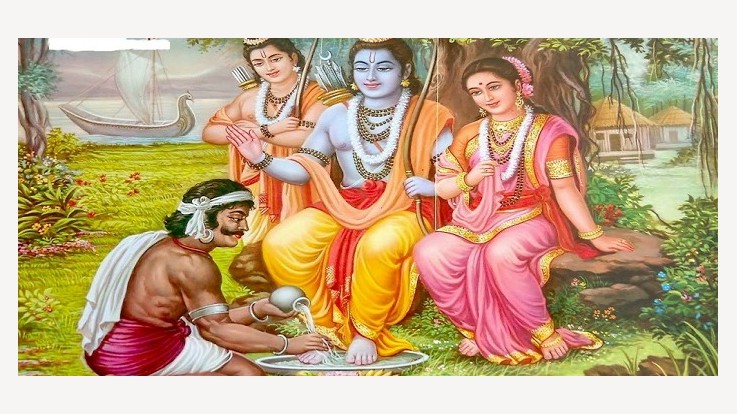 During exile period in the forest, after abduction of Sita by evil Ravana, Rama and Lakshmana went in search of her.

Sabari, a tribal woman, lived peacefully in the ashram of Sage Matanga and served with her daily duties. One day, as Sage Matanga grew old, he revealed of his departure. Sabari pleaded her guru to take away her along with him but he gave his last words that Lord Rama will come to see you and asked her to stay alive till then to obtain salvation.

Sabari eyes sparkled with anticipation for Rama and waited for his blessings. She waited for the bliss of beholding merciful Rama and years passed in endless waiting. She strewed flowers in the path to her poor hut so that no thorn may ever prick the Lord. She tested some selected berries for their sweetness that she would offer to the Lord. She set these trays day after day eagerly waiting for Rama. She sacrificed her life-breath upon Shri Rama’s feet and just for the sight of him which she assumed to be her life’s most treasured wealth. 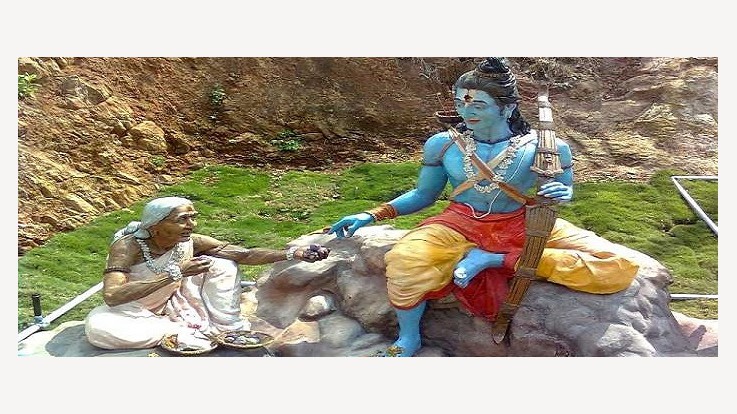 On one fine day, Rama in search of Sita reached Sabari’s hut. Sabari overwhelmed with joy and happiness when Lord Rama arrived and fell at his feet with great devotion. She welcomed him with flowers and expressed that his arrival has sanctified her humble hut.

She offered him some sweet berries that she had collected and tested its sweetness daily. Though the berries were bitten by Sabari, Rama eats them happily but Lakshmana refused to eat. He praised Sabari as the berries were so sweet which can’t be found even in Vishnu’s heaven.Sabari was fortunate by the beholding of Rama and was rewarded her final salvation to her Guru Matanga. Under her guru’s instruction she guided Rama, the path to reach Sugreeva residing on Rishimukh Mountain.