Lord Vishnu is connected to Varaha Avtaar. The story states that as Lord Vishnu was one day was resting at his palace. Lord Brahma's four sons came to meet Vishnu. The palace of Lord Vishnu was guarded by two guards known as Jaya and Vijaya. Seeing Children, Jaya and Vijaya both denied them to enter the palace. Getting very annoyed with the gatekeeper's , Lord Brahma's sons cursed the doorkeeper's to be born as human's and be away from the godly status. 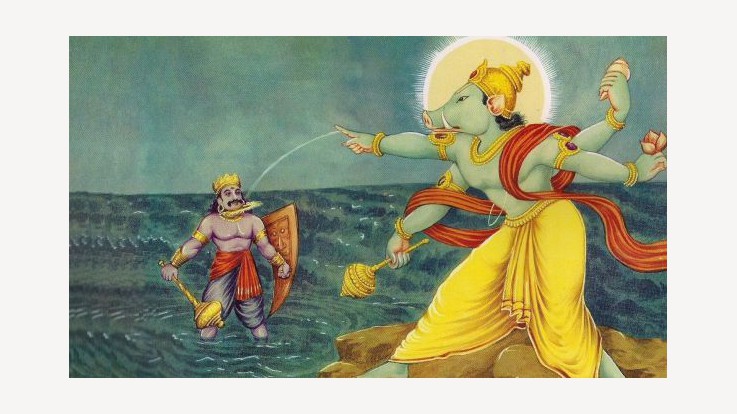 The Battle between Varaha Avatar of Lord Vishnu and Hiranyaksha

A little later hearing to the noise Lord Vishnu came out. Seeing the children, Lord Vishnu arrived at the spot and apologized stating that the doorkeepers were just doing their duty. So as compensation for their insult they said that the curse will be only lifted when Jaya and Vijaya in human forms would meet their death at Lord Vishnu’s hands.

So Jaya and Vijaya were born as on earth, they were known as Hiranyakashyap and Hiranyaksh. When the two were born the earth shook violently. Worrying Indra went to Vishnu saying that if at the time of birth the situation is this, what will happen once they become big. Vishnu assured Indra that they will be killed by him.

Many years when later Hiranyakashyap became a big devotee of Lord Brahma. Pleased with his devotion, Brahma blessed him with a boon that no God, human, Daitya or Asura would be able to kill him. Blessed with immortality, he started to display his strength. With his strength he started to turn his waist side by side and began to churn the sea. Due to churning the sea, the waves started to go high. Seeing the situation Varun Dev got very scared of seeing such a scene and looked for a place to hide.

But Hiryanksh challenged him. At his Challenge Varun Dev accepted his defeat. Hiranyaksh was filled with pride, he went deep into the sea to churn water. Reaching in deep waters, he met Narad Muni.  Hiranyaksh asked him,”Is there anyone as strong as or stronger than me?” Narad Muni said, “Yes, Lord Vishnu is the strongest.” Hiranyaksha started searching for Lord Vishnu, he couldn't find it. The world was made into a round ball and went underwater in Pataal Lok. 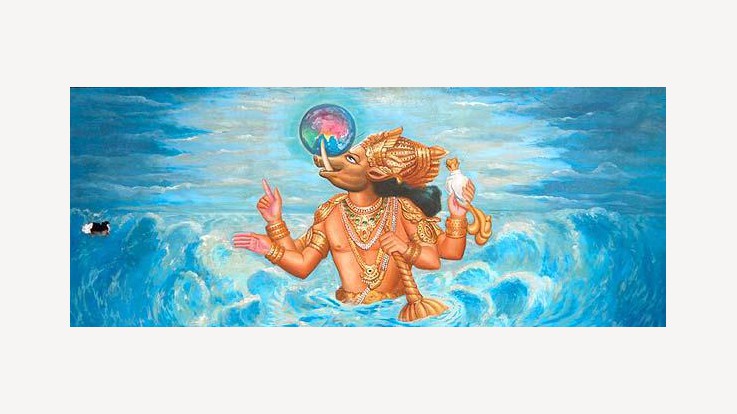 All the gods became worried,  they rushed to Lord Vishnu for getting worried. They said, “Lord please save us. Hiranyaksh has taken Earth and disappeared.” Don’t worry. I know he has taken Earth to Pataal Lok. I’ll soon get Earth back at its position.” Lord Vishnu took the form of Varaha, which is wild boar with two tusks. He went to Paatal lok to have a fight with Hiranyaksha. He used a number of weapons on Varaha, but he had no effect on it. He wounded his strong arms around the boar's neck to strangle his neck. At that very moment, he appeared in his true form..  Lord Vishnu directed his Chakra at Hiranyaksha. The Chakra separated his head from body. Hiranyaka died there and then. Vishnu again took the form of Varaha. He picked up the earth, shaped like a ball on his two tusks. He left Pataal Lok through the sea. He placed the earth in the original position. Lord Vishnu was praised by everyone in heaven.