Andal Jayanthi celebrates the birthday of Andal. She is one of the twelve Alwars elevated as a Goddess after she united with Vishnu. This day is also known as Aadi Pooram. In the Tamil month of Aadi, various aspects of Shakti are rejoiced and worshiped. The star holds Venus energy whose archetype is Goddess Lakshmi. It is on this day Goddess Lakshmi was incarnated as Andal in the family of an ardent Vishnu devotee. Aadi Pooram or ‘Aandal Jayanti’ is a prime festival is dedicated to Goddess Andal, an incarnation of Goddess Lakshmi. Aadi Pooram is celebrated with great enthusiasm and fervor during the Tamil month of ‘Aadi.’ The day is also observed as the day of Goddess Shakti. It is believed that the Goddess comes to the Earth on this auspicious day, to bless the devotees. The devotees worship the deity with a dedication to lead a happy and prosperous life. ‘Aadi’ is the fourth month in the Tamil calendar while ‘Pooram’ is one of the 27 Nakshatras. The devotion of Goddess Andal to Sri Ranganatha (an incarnation of Lord Vishnu) is widespread in the southern India.

The day holds immense significance in Goddess Shakti temples. In the Saiva temples, Aadi Pooram is observed as the festival of ‘Valaikappu.’ Glass bangles are offered to Goddess Andal and distributed among all devotees. By wearing these bangles, the couples will be blessed with offspring. When pregnant women wear bangles; it shields the child from the evil forces. When Aadi Pooram falls on a Friday, it becomes more auspicious, and the celebrations become more elaborate with rituals. 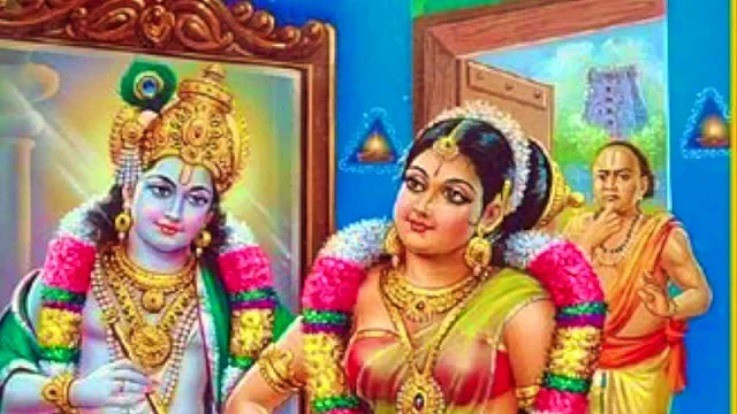 At the age of fifteen, Andal had declared her yearning for Lord Ranganathar, who is an incarnation of Lord Vishnu. The legend has it that Andal’s father had a dream where Lord Vishnu instructed him to bring his daughter as a bride to Srirangam Temple. After she had arrived as a bride to the temple, she turned into light and merged with Lord Vishnu in sanctum sanctorum. Since the occurrence of this event, shrines of the couple Andal with Ranganathar have been built in the village temple of Srivilliputtur. The celebration of Aadi Pooram is elaborate Goddess Andal temple at ‘Srivalliputtur,’ the birth-place of Aandal in Tamil Nadu. This festival is also observed for ten days. On the last day, the marriage ceremony of Lord Ranganatha and Andal is held with great pomp. It is a popular belief that unmarried girls who worship Goddess Andal on the last day will very soon get married.

The celebrations of Aadi Pooram are splendid in the every Lord Vishnu temples across Tamil Nadu. Aadi Pooram is a 10-day festival observed in all Lord Vishnu temples in the state of Tamil Nadu. The tenth day is celebrated as ‘Aadi Pooram,’ and a grand marriage ceremony of Goddess Andal and Sri Ranganathaswamy is conducted. This event is also known as ‘Thirukalyanam.’ Devotees get up early and start decorating their house with Kolam. Goddess Andal is fond of Lotus, red color, and Kalkandu rice. The women prepare an elaborate meal for the offering. Goddess Andal is adorned with silk saree, jewelry, and garlands. An elaborate feast is organized by every household. Thousands of devotees visit the temples to witness the marriage of God and Goddess. Special rituals are performed along with the traditional music. The celebrations continue till late at night. After the ‘aarti,’ the food is distributed among the devotees. The devotees also recite ‘Thiruppavai’ and ‘Lalitha Sahasranamam.’