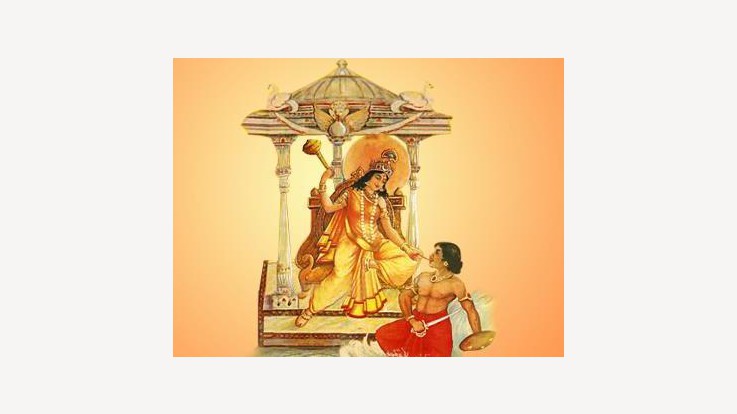 Those going through the main or sub period of Mars are advised to perform the Puja of Maa Baglamukhi with devotion and dedication to remove all the malefic effects caused by the planet Mars. This puja is recommended so that unusual happenings can be avoided and the life can be lived with prosperity. Maa Baglamukhi Pooja is performed to review the kundalini. Several mantras are recited for the purity in the individual. It also helps to arouse the adhisthana chakra. Goddess Bagalamukhi relieves her devotee from problems related to enemies and negative energies. Goddess Bagalamukhi is also known as Pitambara. It is believed that she loves yellow colour and hence, yellow colour articles are used for her puja. Ma Bagalamukhi’s complexion is yellowish. Her devotee should wear yellow coloured clothes while worshipping Bagalamukhi.

Goddess Bagalamukhi is the eighth Mahavidya. She possesses immense power. She helps her devotees to get rid of all sorts of problems. The word ‘Bagala’ is derived from the Sanskrit word, Valga. This means ‘bride.’ She can be seen riding a beautiful chariot and sitting on a throne. Chariot and throne are embedded with gemstones. She is pleased instantly with yellow flowers and coconut. Diya should be lit, and Turmeric must be offered to her along with Yellow clothes. Reciting Ma Bagalamukhi’s mantras relieves a devotee from all problems.

Mata Bagalamukhi at a temple

According to a legend, a destructive storm during the Satyug started destroying everything. People became helpless. There was no one to protect the world. Lord Vishnu was worried. He started worshipping Lord Shiva who told him that only Goddess Shakti could curb the storm. Lord Vishnu offered his austerities and prayers near Hardira Sarovar. Pleased by his devotion, Goddess Shakti appeared in front of him through Mahapit Devi’s heart near the Haridra lake in Saurashtra district.

On the night of Chaturdashi, Shakti appeared as Goddess Bagalamukhi and blessed Lord Vishnu with a boon. The destructive storm could finally be stopped. Ma Bagalamukhi is considered to be equivalent to Lord Brahma’s weapons. Devi is also a form of Siddha Vidya. She is even worshipped by Tantriks.

On the day of Bagalamukhi Jayanti, devotees should wake up early and offer prayers to Ma Bagalamukhi. They should wear yellow clothes. A person should perform sadhana in isolation or with an experienced sadhak. To worship Ma Bagalamukhi, a devotee should sit on a platform covered with yellow cloth. He should be facing east. Place a photo or painting of Ma Bagalamukhi. After this, lamps should be lit. Yellow rice, Haridra, yellow flowers, and Dakshina should be held in the hands while offering the prayers. Following the principles of Brahmacharya is necessary during this puja. Recite mantras in front of the puja yantra. It should be made of Chickpeas dal and should be kept on a silver utensil.