India is a land of distinct flavors and colors; each region in India offers a unique experience to each traveler who is visiting the land. One of such beautiful and memorable experiences in the Northern part of the country is the Ganga Mahaostav. The Ganga Mahaostav has its roots in the holy land of Varanasi and the festival is known as Dev Diwali. Ganga Mahostav is a five-day long event that is celebrated at the Ghats of the sacred river Ganga. The river Ganga is considered holy by Hindus and gives a sense of belonging to people living close to the Ghats or banks.

The event gives stress on the promotion of the classical style of Indian music & dance. One can easily get a glance of some of the major Indian classical musicians like Pundit Chhanulal Misra, Zakir Hussain, Zila Khan, Ustad Bismillah Khan, Girija Devi, Bal Murli Krishnan, Bhimsen Joshi, Birju Maharaj, Amjad Ali Khan etc can be seen performing at the Mahaostav.

When is Ganga Mahostav Celebrated?

Each year the festival falls on a different day depending on the Lunar Calendar. The Mahaostav is celebrated on Dev Diwali or the full moon day in the month of Kartik according the Hindu Lunar calendar. Folklore states on the eve of Dev Deepavali all the God come down from Heaven to take a dip in the Holy River Ganga. The five-day event starts on the 11th lunar day of Kartika, which is known as Prabodhini Ekadashi and ends on Kartik Poornima. 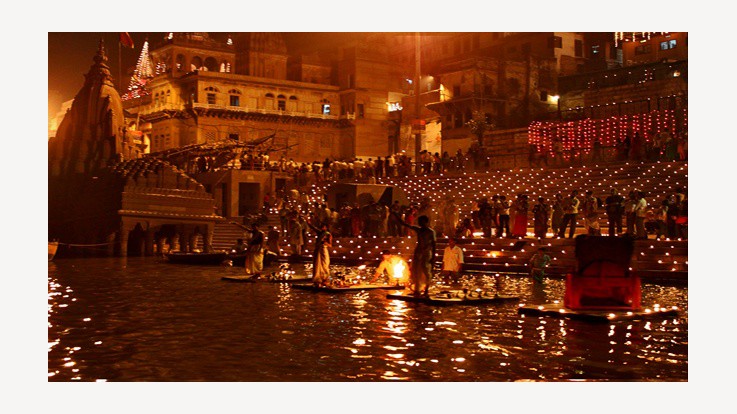 There are a number of rituals performed on Ganga Mahaostav.  The main rituals performed consist of the Kartik Snan, which consists of taking a dip in the holy Ganga River in the morning. The other is Deepdan that’s done in the evening. Deepdan means offering oil lighted lamps to Holy River Ganga. After lighting up the lamps, Ganga Aarti is performed singing beautiful and soothing chants. Hundreds of pilgrimages take a plunge in the river Ganga at dusk in the morning on the holy day. People take a dip in the holy river Ganga chanting hymns and doing Surya Namaskar bowing to the Sun god.

Other than the religious significance, the martyrs and other national heroes are remembered while worshiping the river Ganga. The Amar Jawan Jyoti is placed on the Dashashwamedh Ghat by a social organization named Ganga Seva Nidhi. The traditional last post is also performed by all the three armed forces, followed by a closing ceremony, where sky lamps are lit. Patriotic songs, hymns, and bhajans are sung and the Bhagirath Shourya Samman awards are presented.

What should not be missed?

If you are a tourist visiting the land of Ganga, the sight of million lamps being lit on the Ganga Ghats out of which, some are fixed and some are floating. The river comes in vivid shades.

On the eve of the festival, thousands of pilgrims flock the Ganga Ghats. People from all over the globe and country gather at the Ganga Ghats to see the magnificent Ganga Aarti. The Ganga Aarti is performed at the Dashameshwar Ghat. All the buildings and houses close to the Ghats have been lit with earthen lamps. Twenty-one young Brahmin priests and twenty-four girls perform the aarti. The rituals involve chanting Hymns, shell blowing, drum beating and brazier burning.

Tourist can enjoy boat rides in the evening in the river Ganga. The festival also gives a chance the tourist to see the popular cultural programs, dance programs, sculpture displays, classical music, a country boat race, local arts and crafts fair, and martial arts. And donot miss is the Ganga Water Rally that runs between Allahabad-Mirzapur-Chunar-Varanasi. 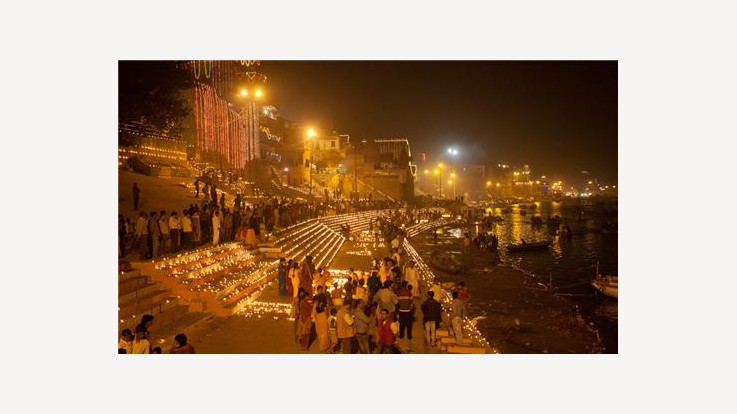 Dev Deepawali falls on the fifth day of the Ganga Mahaostav. It is believed that on this day all the gods from the heaven descend on the earth to take a dip in the holy river Ganga. Legends also believe that on this day, the Gods killed the demon Tripurasur. To celebrate the victory Dev Deepwali is celebrated. On Dev Deepwali, the rituals are commenced by offering a prayer to Lord Ganesha. The rituals are performed twenty-one Brahmin and forty-one girls chant the Vedic mantras. After the chants, Aarti is performed at Dashashwamedh Ghat.