As a family servant of Queen Kaikeyi, Manthara lived with her from the time of her birth. Manthara accompanied Kaikeyi to Ayodhya as a trusted maid upon her marriage to Dasharath. Manthara was a hunchbacked and ugly in appearance. She was an expert talker and a cunning woman who can manipulate her way to get what she wants. She constantly schemed to further her position at the Court. Manthara's position was depended on Kaikeyi's status at Court. Hence, she left no stone unturned to feed young Kaikeyi's mind with insecurity and jealousy of Kausalya, despite Dasharatha's obvious love for all of his wives. In Hindu epic Ramayan, Manthara, the maid convinced Queen Kaikeyi that the throne of King Dasharath belonged to her son Bharat and her step-son, Prince Rama should be exiled from the kingdom for the fourteen years. 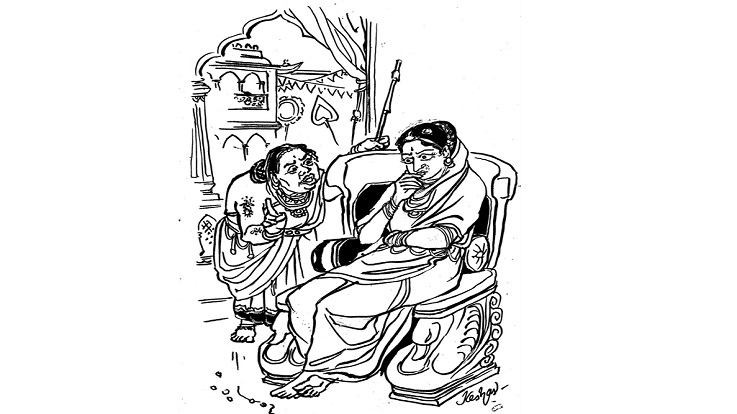 A daughter of the mighty Ashwapati, a long-term ally of Kosala, Kaikeyi married King Dasharath. Dasharatha's first wife, Kausalya, had not been able to conceive a child. Hence, King Dasharath married to Kaikeyi. She was his second wife. The word 'Kaikeyi' means 'belonging to Kaikeya,' which is an ancient country. She was the only sister to seven brothers who grew up without a maternal influence in her childhood home. Her father had banished her mother from the kingdom of Kekaya after realizing that her nature was not conducive. Kaikeyi was brought up by her wet nurse.

Kaikeyi was the youngest of King Dasaratha's three wives. She was the mother of Bharata. Once, during a fierce battle, Dasaratha's chariot wheel broke. At that moment of distress, Kaikeyi was with Dasarath. She helped Dasarath by fixing the wheel of the chariot. She nursed the wounded King back to health. Pleased by her courage and care, Dasharath offered her two boons. However, Kaikeyi chose to ask for those boons later.

Kaikeyi was a bit insecure as she was the youngest of the three queens. Kaikeyi's maid Manthara suggested her to increase her status by making Bharata the King instead of Ram, which will make Kaikeyi the queen mother. She also convinced Kaikeyi to ask for the exile for Ram. Just before the crowning ceremony of Ram, Kaikeyi asked Dasarath for the two boons. Kaikeyi asked king Dasahrath to make her son Bharat the king of Ayodhya, and for second boon she asked Rama's exile from Ayodhya for fourteen years. King Dasarath granted her the boons keeping his promise, but he died of a broken heart as he was separated from his son Rama. Kaikeyi regretted her actions, and she blamed herself for Dasharath’s death. Her son Bharat blamed her and said that he would never call her 'mother' again.