Radha Kunda is located in the North-West part of Vraja near Vrindavana. Gaudiya-Vaisnavas consider this lake of SRadharani to be the most sacred place. Radha Kunda is situated on the parikrama road near the Govardhana Hill which is about 11 km long, and it resembles the form of a peacock. The ponds - Radha Kunda and Syamakunda resembles Peacock’s eyes. 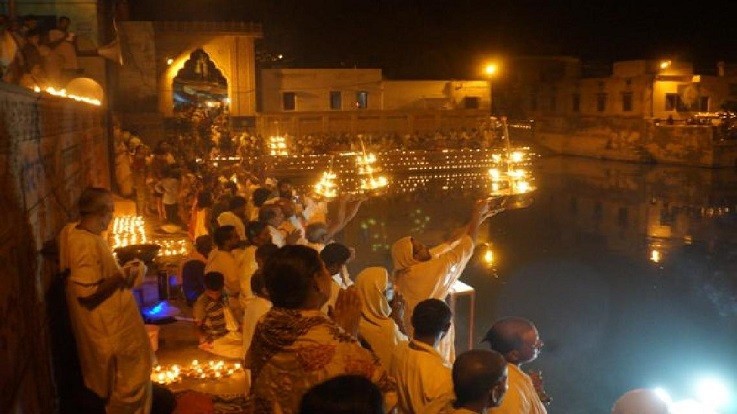 A holy bath in Radhakunda on the auspicious day of Ahoi Ashtami is considered very auspicious. Childless couples come here to seek blessings of Goddess Radha. The bathing day falls on Ashtami of Krishna Paksha in the month of Kartik. It is believed that a holy dip in Radha Kunda on Ahoi Ashtami helps couples to conceive a child. Hence, thousands of couples come to Govardhan to take a holy dip in Radha Kunda. The midnight time or Nishita time is appropriate to take a holy dip. Hence, bathing begins at midnight and continues until morning. The couples perform Puja and offer Kushmanda, white raw Pumpkin which is famously known as Petha in a red cloth. 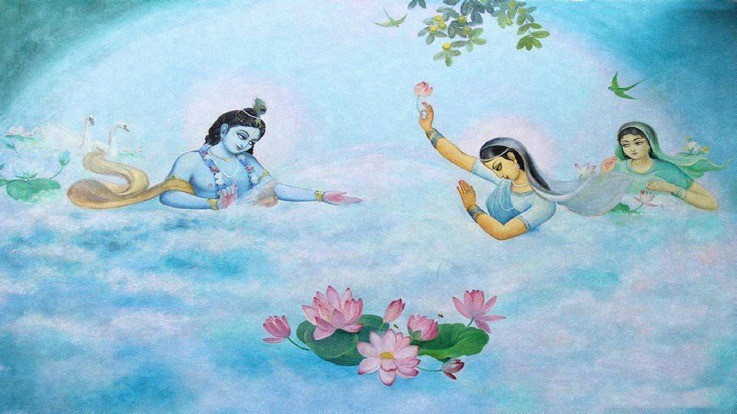 Radha Kunda appeared after Lord Krishna killed the demon Aristasura. Demon Aristasura was in the form of a bull, which is considered to be the symbol of religion. According to Gopikas Lord Krishna had made an offence. Radharani rebuked Krishna, saying that he became impure by killing a bull. She asked him to get purified by taking a bath in the holy rivers of all sacred places. Lord brought all the waters of holy rivers to that spot. He struck the ground with his lotus feet, and the waters from all holy rivers appeared. This place was known as Syama-Kunda. Radharani also created a Kunda by digging the earth with her bangles. All the holy rivers requested Radharani to allow them to enter this new Kunda. Thus Radha Kunda appeared. Gloriously manifested on the banks of Radha-Kunda are eight Kunjas named after Radharani's principal Sakhis. These Kunjas are filled with the sweet humming of bumblebees.

About 5,000 years later Sri Chaitanya Mahaprabhu came to Vrindavana and discovered these Kundas. In the centre of Radha Kunda is a small area with the wall around it called Kankanakunda which is the area of the actual pond created by Radha with her bangles. Radha Kunda was created at midnight on the eight days of the waning the moon in the month of Karttika.

Bathing in Radha Kunda is beneficial on the day of Ahoi Ashtami. Devotees offer Prasadam, garlands, and Pumpkins to Radha Kunda. At midnight, they take a bath in Radha Kunda and then in Syama Kunda.