Cheti Chand is observed on the second day of the Sindhi Chet month or Chaitra month of Hindu calendar. Hence, it is known as Cheti Chand. It is the beginning of Sindhi New Year. It is the most popular Sindhi festival which is celebrated during the waxing phase of the moon of Chet month. The main festival begins with the worshiping the Lord Jhulelal and Bahrano. Men perform the folk dance, Chej on Sindhi music. Sea God of the Sindhis- Jhulelal Saint is worshipped by performing aarti. It is also a day of worshiping and thanking the God of water, Varun Dev. It is a birthday celebration of Sai Uderolal or Jhulelal. On this day the water god, Varun Devta has incarnated as Sai Uderolal or Jhulelal to protect Sindhis. Due to the first appearance of the moon during the Cheti month, this day is known as Cheti Chand. Cheti Chand is celebrated in honour of the birthday of Water god (Varun Devta) Sai Uderolal, popularly known as Jhulelal. Hence, this festival is also known as ‘Jhulelal Jayanti.’ On this day, people worship water. They also observe what is known as ‘Chaliho Sahab’ on this day. 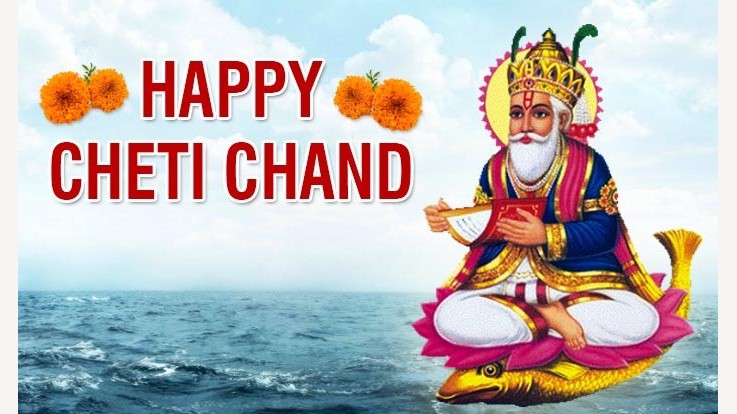 Cheti Chand falls on the same day or next day of ‘Gudi Padwa’ and ‘Ugadi’ festival. Cheti Chand is observed mostly on the second day of the Shukla Paksha of Chaitra month according to traditional Hindu lunar calendar when the moon is visible. The day has importance as it is believed that Varun Dev appeared as Uderolal to save Sindhi community from the dictatorship of a ruler who wanted to destroy the Sindhi culture and Hinduism. It is also a day of worshiping and thanking the God of water. 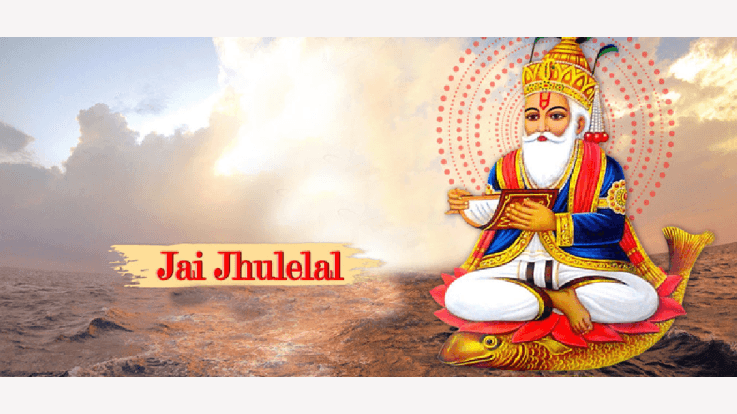 Legend has it that, Sindh came to be ruled by the Sumras in the tenth century. Sindh was flourishing under the rule of the Sumras. However, a tyrant named Mirkshah was threatening Sindhi Hindus to either convert to Islam or face the death. Sindhi prayed to the Water God for mercy. They prayed and sang devotional songs in praise of God Varuna without eating anything. Their prayers were answered after 40 days. The water God promised them that a divine child would be born in Nasarpur who will save them from the tortures of Mirkshah. The divine child took birth in the womb of Mata Devaki in the family of Rattan Rao Luhana of Nasarpur as “Uderolal.“ In Sanskrit ‘Udero’ means the one who has sprung from the waters. It is believed that the child was an incarnation of God Varun. This child was later known as Saint Jhulelal as saviour God of Sindhis, whose birth anniversary is till date celebrated on Cheti Chand by the Sindhi as Jhulelal Jayanti. 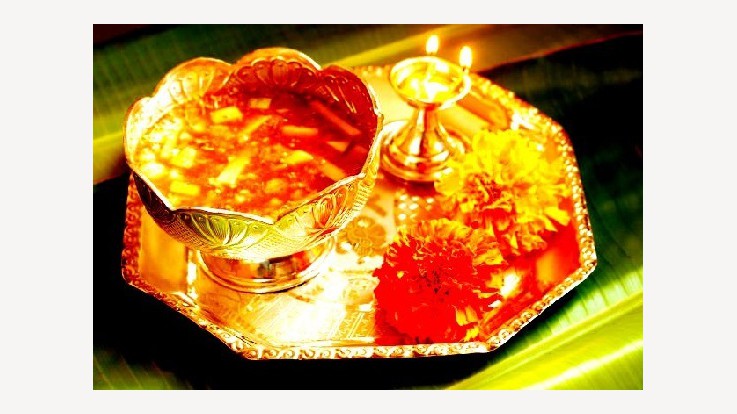 Puja thali for the Puja

The followers of Jhulelal perform the prayer for forty days (“Chaliho“) and celebrate “Thanksgiving Day” after “Chaliho.” Devotees observe fast, and after offering prayers, they break their fast with coconut milk, sugar, molasses, and fruits. Many Sindhi take Baharana Sahib to a nearby river or lake. A procession is taken out to the river front or sea shore. Baharana Sahib consists of Oil Lamp, Crystal Sugar, Cardamom, Fruits, and Akha along with Water jar and a Coconut in it. The plate is covered with cloth, flowers, and leaves. They also carry an idol of God Jhulelal. A wheat flour lamp with five wicks is lit on a bronze plate which is filled with rice grains, pure ghee, and vermilion; called Jyoti Jagan is performed. After Bahrano Saheb is immersed in the water along with rice and sugar Prasad called “Akho“, it is customary to sing Lal Sain’s Panjras and Pallav to seek his blessings. Sindhi greets each other saying “Cheti Chand jyon Lakh Lakh Wadayun Athav” on Cheti Chand.