In the legend of Mahabarata the story of Eklavya has its own distinct place. Eklavya’s  dedication and desire for learning deserves a special mention. The story of Eklavya is an example of a  Guru-Shishya relationship. The relationship also narrates a tradition of showing intense love and respect for the teachers.

Introduction to the story

The story of a young tribal boy forms a very significant part of Mahabarata.  The story tells us about Eklavya’s passion to learn the art of archery from his beloved Guru Dronacharya.

About five thousand years ago there lived a boy called Eklavya in the kingdom of Hastinapura.  Known to be a daring and courageous boy, the boy called Eklavya was loved by everybody. Eklavya’s father was a chief or the head of the tribe.  On all hunting expeditions, Eklavya used to accompany his father.

On one such hunting expeditions Eklavya saw Dronacharya’s school called Gurukul.  He saw Dronacharya teaching the art of warfare to the Pandavas and the Kauravas.  Eklavya was amazed to see the teaching skills of Guru Drona. He could not move his eyes from the bow and arrow and decided to learn archery from the Great Drona. Since he accompanied his father on the several hunting expeditions, he often repented for missing his aim while hunting for deer and other animals.  He wanted to learn all the tricks that were being taught  by the Guru to his disciples.

Eklavya went to his father and informed him about his love towards the art of archery. He told him that he wanted to learn the art from the famous Guru Drona.  On hearing his son’s wish, the father replied that the Great Guru taught nobody except the princes of the Hastinapura. He had been engaged by Bhisma to teach the art to the future kings of Hastinapur. But Eklavya had taken an oath that he would only master the art from his choosen Guru.  He wanted to meet the Guru in order to convince him to teach.

As desired, he met Guru Drona and requested him to teach him the art. But Drona did not accept him as a disciple and refused to teach him.

Drona explained that none other than the Kshtriyas and Brahmins could become his students.  Since Eklavya was a Shudra so Drona refused to teach him. Eklavya was depressed to hear the rejection.

A disheartened Eklavya still held his head high and did not lose his hope of becoming the best archer in the world.  Finally, he took a decision. He would be a world famous archer and his Guru would be the Great Guru Drona.   Deep inside the forest was the home of Eklavya. He moved deep inside the forest and made a statue of Drona out of clay.  He considered the statue of Drona as his Guru and worshipped it all throughout the day.  In front of the clay image he practised archery. With immense devotion in heart for his Guru and very strong will power, he became good at the art eventually.

One day Eklavya was practising hard while he heard a dog barking very loudly.  He ignored the dog and continued with his work, however the dog kept on barking. The dog started to distract Eklavya. Eklavya could not withstand the bark of the dog and shot the dog with arrows in such a way  that although it did not hurt him but the dog could not close his mouth which stopped him from barking. Drona saw the condition of the dog and  really wondered about who had shot the arrows in such an amazing way.

Eventually, Drona found Eklavya, the best archer in the world. Although he could not recognize Eklavya in the beginning but soon he remembered Eklavya, the Shudra boy, who had once visited him with a request to become his disciple.  Eklavya narrated Drona that he had made a clay image of Drona and learned the art.

Arjuna, one of the princes of Hastinapur  was upset to hear that Eklavya had become the world’s best archer since his Guru Drona had promised him to make him the world’s renowned archer. Drona remained silent when Arjuna questioned him about Eklavya.  The famous Guru was also very sad as he wanted talented Arjuna to become the best archer. Now he realized, Arjuna’s dream cannot be fulifilled.

Drona met Eklavya and wanted him to give him Guru Dakshina. Guru Dakshina is a gift given by the student to the teacher at the time of the end of the training.  Drona demanded Eklavya to cut his right hand thumb and offer it to him.  Everybody was shocked to hear it as without the thumb Eklavya could never practise the art of archery.  But Eklavya showed his bravery and loyalty towards his Guru. Without any hesitation, he cut his thumb finger and offered it to his Guru. Even the Guru himself was shocked to see Eklavya’s brave act. He blessed him and said that even without the thumb he would still be the greatest archer in the world. 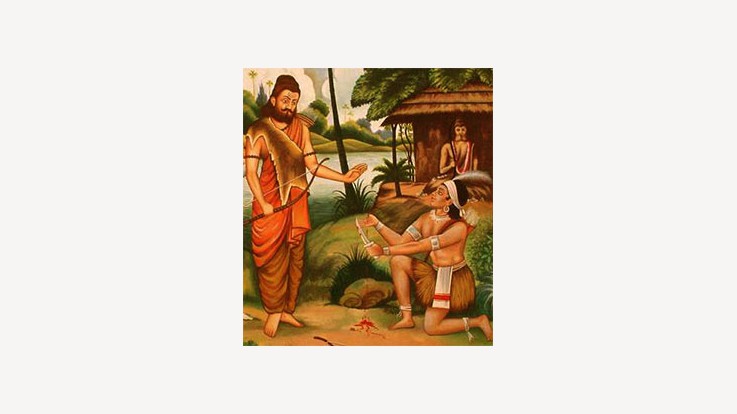 Eklavya is still praised for his courageous act and considered as the one of the bravest and greatest archers in the world.