Rama, eldest son of Ayodhya’s King Dasaratha, had acquired the art of war and the ways to accomplish as a King. But, his father’s promises to wife Kaikeyi made him go into exile for as long as fourteen years into the forest.

Rama, wife Sita and brother Lakshmana left Ayodhya to live in the forest for fourteen years. As their exile time was nearing the end, because of Shurpanakha’s revenge, Sita was abducted by evil demon Ravana of Lanka.

They went in search of Sita and found wounded Jatayu, friend of Dasaratha, who narrated the whole story about abduction of Sita and informed that Ravana flew southwards.

Moving towards south, they met an army of monkeys and their King Sugreeva. They agreed to help Rama in searching Sita and Hanuman, an intellectual monkey and minister of army, went in search of Sita over the ocean and found Sita prisoned in Lanka by Ravana. Rama and his monkey army immediately left and reached Lanka crossing the ocean by Rama’s magical grace.

Battle at Lanka and Ravana Vadh:-

Ravana was much worried on knowing about Rama’s arrival and summoned his ministers for their suggestions who unanimously told him to battle Rama and kill him. His younger brother, Vibhishana was thrown out of his Kingdom as he suggested Ravana to surrender and hence he joined Rama’s army.On reaching Lanka, Rama at first sent a messenger Angada saying ‘to return Sita or else should face destruction’ but enraged Ravana refused. Rama held a meeting to decide on their next step of battle and planned for the next day.A ferocious battle was waged between the two armies with thousands of deaths on the battlefield. 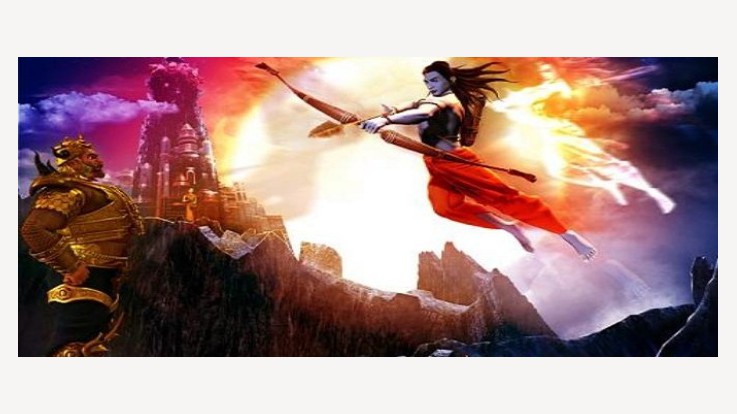 Ravana’sarmy started losing and all his chief warriors were killed. Now, his son Indrajit, with power to fight being invisible, succeeded to tie Rama and Lakshmana with serpents but luckily Garuda, king of birds, released them. Indrajit was killed in this battle. Angry Ravana pierced his arrow on Lakshmana, who fell unconscious. Later, Hanuman brought Sanjeevini medicine from Himalayas to save Lakshmana.Rama’s army bravely succeeded to kill all the demons except one, Ravana.

Ravana was shattered, after the defeat of his brave army-chiefs, his son and brothers;he started for the battlefield to fight against Rama. He mounted his chariot drawn by horses, with ten heads and twenty arms with powerful weapons. He came face-to-face with Rama. Both were equally powerful and the battle between them was very fierce.

Ravanawas indestructible by Rama’s arrows. One by one Rama cut off Ravana’s ten-heads but no sooner was one head cut off then another grew to take its place.

Vibhishana informed that Ravana’s weakest point was at his navel. Finally, Rama used a very powerful weapon, Brahma-astra, which was the mightiest of all mighty weapons,the weapon whizzed through the air emitting flame and it pierced the chest of Ravana. Ravana fell dead from his chariot.

Ravana had lost everything due to his greed and lust.

Sita’s eyes sparkled with tears of joy as she was once again united with her husband Rama. But Rama greeted her from a distance. And Sita soon understood that he doubted her loyalty after her stay with Ravana. Insulted and hurled as Rama, in front of everyone, doubted her. She told Rama that she was loyal to him and will prove herself by doing Agni Pariksha.Sita instructed Lakshmana to build a fire to walk through, and the flames would swallow her if she had been disloyal to Rama in thought or in deed. She walked into the fire calmly. Everyone watched in horror but to their relief Sita emerged out without any harm. 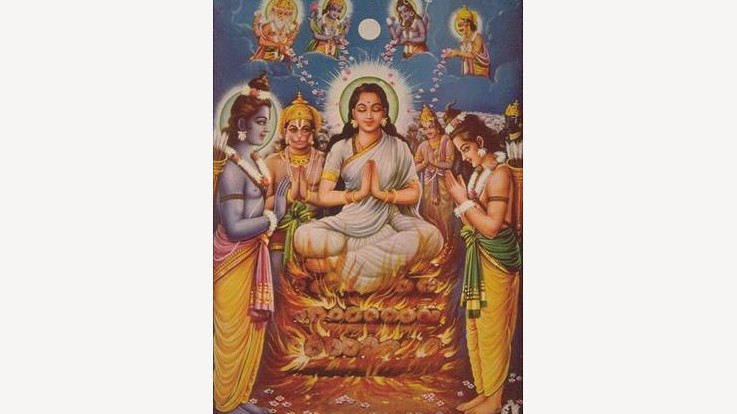 Rama embraced Sita and told he never doubted her but it was his duty to satisfy the minds of others and to retain respect as a King.The exile was almost over and on reaching Ayodhya, Rama was crowned, The King of Ayodhya. Hanuman, an ardent devotee of Rama, sat at his feet.Sri Rama ruled over Ayodhya for many years.