Kumbhakarna was the younger brother of demon Ravana. Despite his monstrous size and a great appetite, he was described to be of good character and a great warrior, though he killed and ate many monkeys only to show his power. He was considered pious, intelligent and unchallenged warrior. Along with his brothers, Ravana and Vibhishana, Kumbhkarna performed a yajna and penance to please Lord Brahma. When he was asked for a boon(blessing) from Brahma, his tongue was tied by Goddess Saraswati. Hence, instead of asking for Indraasana (seat of Indra), he asked for Nidraasana (bed for sleeping). His wish was immediately granted. However, his brother Ravana requested Lord Brahma to annulled the boon as it was indeed a curse. As per the boon, Kumbhakarna slept for six months, and when he awoke, he ate everything in the vicinity, including humans. Kumbhakarna was married to Vajrajvala. They had two sons, Kumbha and Nikumbha. His wife Vajrajvala too fought in the war against Rama. 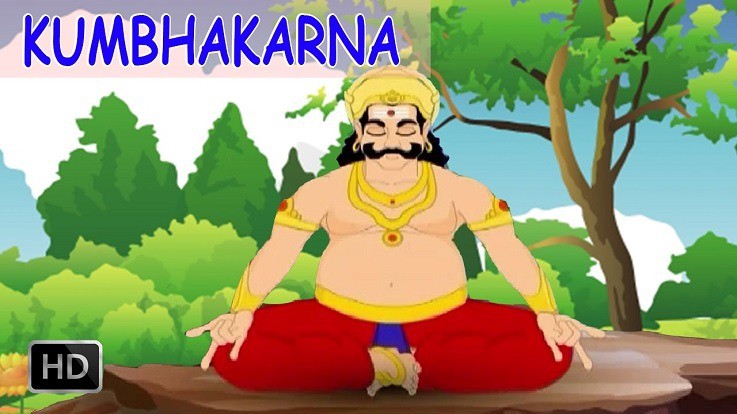 It is believed that nobody in the entire Indralok was able to defeat Kumbhakarna. He was incredibly powerful and was considered the strongest in the universe. Even Lord Indra was jealous as his Indra-Sena was unable to beat him. Kumbhakarna’s capacity to eat was massive. When he would wake up for a day, he ate up everything. Even before the curse, Kumbhakarna is known to have eaten in tons and therefore Lord Brahma, and Goddess Saraswati both were concerned that his appetite would gulp down the entire universe. He was considered the most powerful demon. Even Lord Indra was jealous of him. He was a great philosopher. It is said that sage Narad had taught Kumbhakarna philosophy because Kumbhakarna was never really interested in violence. Kumbhakarna knew that the waging war against Lord Ram was futile. However, he fought for his brother’s pride and did not leave his side, unlike Vibhishana. During the Ramayan war, Ravana was humiliated by Lord Ram and his army. He decided to take the help of his brother Kumbhakarna, who was awakened by a large difficulty. When he came to know about the circumstances of Ravana's war with Lord Ram, he tried to convince his brother Ravana about his wrong doing. However, he chose to fight in the battle due to his loyalty to his brother. Kumbhakarna went into battle and devastated Lord Ram's army. On the battleground, Kumbhakarna killed many Vanars from the Vanar-Sena. He injured Hanuman and knocked Sugriva unconscious, but he was ultimately killed by Lord Ram. When Ravana heard of his beloved Kumbhakarna's death, he fainted and proclaimed that he is truly doomed. It is said that Kumbhakarna uttered ‘Jai Shri Ram’ before dying and ultimately attained salvation.