Introduction:-
Rama, an incarnation of Lord Vishnu, is the eldest son of Ayodhya’s Dasaratha and Kausalya. As time passed, Dasaratha grew older and decided to hand over the reign of his kingdom to Rama (eldest son). But his second wife, Kaikeyi’s two boons, first that her son Bharata should be Ayodhya’s King and second to send Rama into exile for fourteen long years makes Rama, to leave Ayodhya,to respect his father’s promises. Though Rama refuses, Sita and Lakshmana become rigid and decide to leave along with Rama. Rama’s exile:- Rama, Sita and Lakshmana bid farewell to their parents, gurus and to people of Ayodhya and leave. Tears flowing from the eyes of people and the crying sounds reflected the somber mood. They left a crying Ayodhya behind into exile of fourteen years only to fulfill his father’s promise. Dasaratha, unable to bear Rama’s departure falls sick and soon passes away. Bharata learns about his mother boons and Dasratha’s death, reaches Ayodhya. He refuses to inherit the throne and goes into the forest in search of Rama.

Chitrakut Forest:-
Rama, Sita and Lakshmana enter the forest of Chitrakut crossing the River Ganga, to an isolated and peaceful place. At the time of crossing Ganga, he meets Kevat, a boatman, who gets blessings to cross the ocean of life by Rama.They build a small hut near the stream where Bharata soon approaches Chitrakut. Though he pleaded, Rama refused to return to Ayodhya. Bharata with great respect carried his sandals and agreed to rule Ayodhya only as his representative for fourteen years. Rama didn’t wish to live at Chitrakut and started journey towards the forest of Dandaka which was dark and deep. Then they travelled to south of Vindhyas and visited the divine sage Agasthya. The sage advised Rama to settle at Panchavati on the banks of River Godavari. 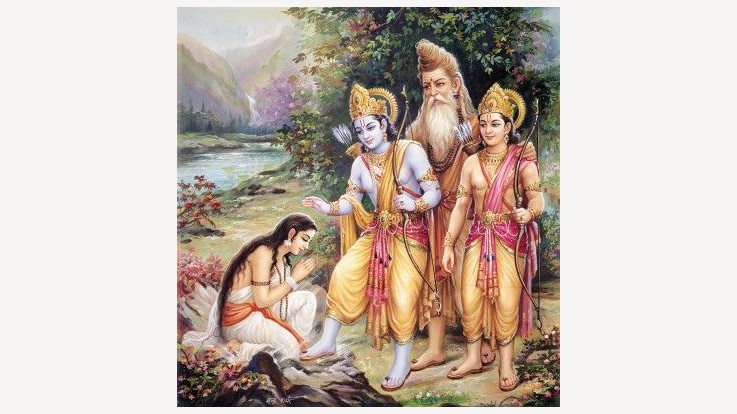 Panchavati:-
Rama’s journey goes to Panchavati, where they build a small hut. He meets the vulture king, Jatayu who assures to help them as he was a friend of Dasaratha. An evil woman, Shurpanaka, sister of Ravana falls in love with Rama but when he refuses she attacks Sita.Enraged Lakshmana cuts her nose and she runs away to seek her brother’s help. Ravana turns wild and decides to abduct Sita in revenge.Ravana plays a tricky plan and succeeds to take away Sita to Lanka. However, on his way, Jatayu opposes him in abducting Sita but gets killed. Rama and Lakshmana go in search of Sita where they meet injured Jatayu who informs them about Sita. They then meet a demon Kabhand, cursed by Sage Sthulsira to an ugly creature of long-foraging arms. He attains salvation when Rama cuts his arms and burns him into ashes. The demon regains his original form and informs about Ravana’s origin, his boon from Brahma and directs southwards. Next they meet a great devotee of Rama, Sabari who waited for many years just to get his blessings and salvation. She later guided Rama to the place Rishyamukh Mountains to meet Sugreeva and his team (monkey’s group) who would help in rescuing Sita. 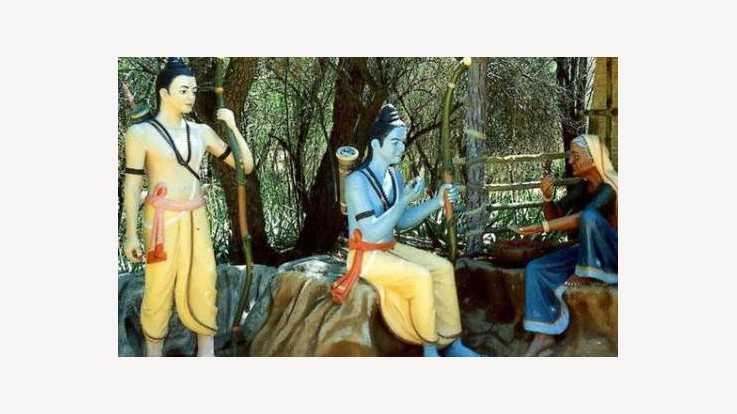 At Rishyamukh:-
Rama meets Sugreeva and befriends him. On his request, he killed his elder-brother, evil Bali who had seized his wife and Kingdom of Kishkindha for his sins. Sugreeva and Hanuman keep-up their promise to free Sita from Ravana.Hanuman, with power to fly, goes in search of Sita and finds her imprisoned in Lanka, across the ocean. Hanuman returns to inform about Sita and then they all proceed towards Lanka. With the magical power of Rama, his army will build a bridge on the ocean and reach Lanka. Battle at Lanka:- After a long battle, Rama with all his powers and strength kills ten-headed evil demon Ravana and brings back his wife Sita. Sita proves her purityby passes Agnipariksha. Time comes to return to Ayodhya after fourteen years of exile. The people of Ayodhya welcome Rama, Sita and Lakshmana very grandly and cheerfully.Rama inherits as King of Ayodhya, known as Rama Rajya. During Rama’s exile, few of them get his blessings to attain salvation or mukti though there are many others too who achieve.