The Devi Patan temple is located in Tulsipur, on the banks of river Nakti or Siria in Uttar Pradesh. It is also known as Maa Patteshwari temple. It is one of the 51 Shaktipeeths.

The temple is also a Siddhipeeth, which means it fulfils all the desires of the devotees. The temple of Goddess Patan was established by Sri Gorakshnath. The existing temple was believed to be made by the famous King Vikramaditya of Maurya dynasty. 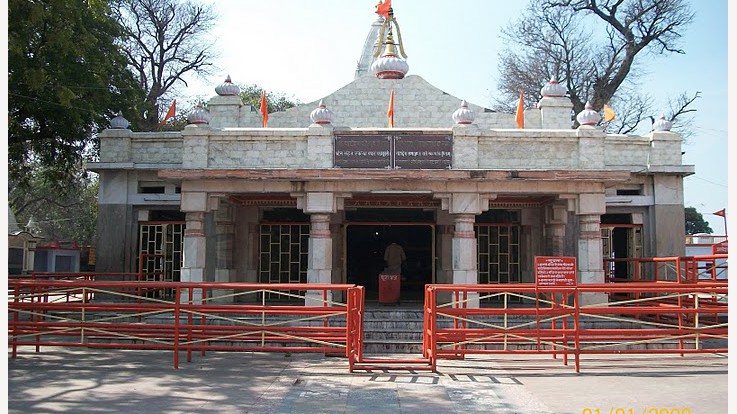 There are two stories establishing the presence of Goddess Patan. Both of them are different stories but they ultimately mark the presence of the Goddess. According to the Hindu legend, when Lord Shiva was carrying the corpse of his wife Sati, her right shoulder (Pat) fell on this land. Another story says that the right thigh had fallen from the corpse of Goddess Sati.  Goddess Sati was chopped off to death by the Sudarshan Chakra of Lord Vishnu. Since then the temple is believed to have the sacred part of the Goddess.

The temple is on the glistening snowy mountains of the great Himalayas,  believed to be home of Lord Shiva and Goddess Parvati. It is around 70 kms away from the Gonda and 2 kms away from the Tulsipur town in the Balrampur district.

The devotees here have a curious way of offering their prayers to the Goddess Patteshwari. The temple is considered sacred to shed off the hair of the devotees as a part of one of the important traditions called “Mundan” in Hindu religion after the birth of child. The temple is famous for the Mundan ceremony among the devotees. They offer their hair to the Goddess Patteshwari as an offering to their prayers. There are people  who are unable to perform the Mundan in the temple premises due to various reasons hence carry their hair to the temple and offer them to the Goddess. It is considered as a sacred ritual among the devotees.

Every year a Shobha Yatra named Peer Ratan Nath is organized in the Chaitra month of the Hindu calendar. The temple has followers not only from India but also from the neighboring country Nepal. This Shobha Yatra has huge mass of devotees from the Nepal. And it is celebrated as a huge celebration to commemorate the blessings of Goddess Patteshwari.

The temple also has a famous pond which is believed to be built by the famous warrior Karna, dated back from the time of Mahabharata. This temple is named as “Surya Kund”. This was developed to pay reverence to his father Lord Surya.

The temple celebrates Chaitan Darshan and Navratri as its major festivals. The Navratri is a long, colorful and musical festival that is celebrated every year to mark the presence of the Goddess on earth and her nine different avatars are worshipped on each day. This marks the triumph of good over evil. The devotees strongly believe that Goddess Patan or Goddess Patteshwari helps them to get rid of their miseries.