Karadayan Nombu is also known as Karadayan Vratam or Savitri Vratham which is observed on the last day of Maasi Masam. The festival marks the Meena Sankramanam or the transition of Sun into Pisces from Aquarius. Married women worship Goddess Mahalakshmi and Goddess Parvathi for marital bliss and good health of family members. Unmarried girls perform the vrat to get an ideal life partner.

Karadayan Nonbu is similar to that of Soubhagya Gauri Vratam or Gauri Tritiya vratam which is observed in Andhra Pradesh and Karnataka, Gangaur vrat of Rajasthan, Jyeshta Gauri Vrat of Maharashtra, Jitiya Puja of Bihar, and Karva Chauth of North Indian states. It is similar to Vat Savitri vrat observed in Bengal, Gujarat, Odisha and some other places of India. Karadaiyan Nombu is an important festival for the married women. On this day, women offer prayers for the longevity and well-being of their husbands. Karadaiyan Nombu is observed on a day when the transition takes place between two Tamil months, Panguni and Massi. It is observed when the Tamil month of Massi ends and month of Panguni begins. Women observe a fast on this day, and a special feast is prepared for the occasion. 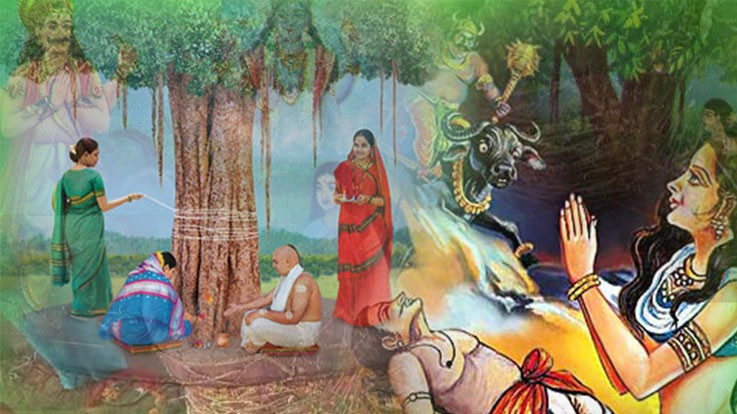 Savithri was the daughter of the King Asrapathi. Savitri wanted to marry Sathyavan who lived in the forest. Despite knowing that he would die within a year of marriage, Savithri married Sathayavan. Savithri did penance her husband. She offered Durwa grass and Peepal leaves. She offered Prasad of wild rice and Toor dal also known as Kara Adai in Tamil. The last day of Sathayavan arrived. Savithri stayed by his husband. The Lord of death came. But he was pleased with her devotion. He wanted to grant her boon. Savitiri expressed her desire to be the mother of 100 children. Yama realized that to fulfill Savitiri's wish he would have to spare Sathyavan's life. Hence, he granted her wish to honor her courage and devotion.

Fasting is an important ritual of Karadaiyan Nombu. Married women observe a fast from the sunrise. The fast is broken after the puja rituals by eating the unique Karadai preparation with butter in the late evening. A special naivedyam is prepared and is known as ‘Karadai Nombu Adai.’ As per the mythological stories, Savitri prepared this special dish and offered it with butter to Lord Yama, God of Death, as a thanksgiving gesture for returning the life of Satyvan. Women worship Goddess Gauri and offer Karadaiyan Nombu Naivedyam to please her. Mantras are chanted at the time of offering. Another significant ritual on Karadaiyan Nombu is wearing the yellow colored thread along with a small flower around the neck, which is referred as ‘Karadai Nombu Saradu.’ This thread is tied for the well-being of husbands. Women also decorate their houses with Kollam.