Masi Magam is an important festival in Tamil Nadu and Kerala. The festival falls in the Tamil Month of Masi (February – March). Magam is among the twenty-seven stars in the astrological system. Makam star in the Masi month usually falls on the full moon day and hence it is considered auspicious across South India, especially in Tamil Nadu, Puducherry (Pondicherry) and Kerala.

It is one of the most powerful Full Moon day of the year since the moon aligns with Magha. It is the birth Star of the Kings and Ancestors. This event occurs only once a year and signifies the descent of heavenly beings to the earth. Masi Magam offers abundance and prosperity associated with the Full Moon and the Magha star. It gives an opportunity to acquire power and energy. Masi Magam is the most appropriate time to get rid of ego.

There are numerous legends related to Masi Makam. Each temple has a tale for celebrating Masi Makam. Legend has it that Lord Shiva appeared as a child before King Vallala of Tiruvannamalai who was an ardent devotee. The king was childless. Lord Shiva promised to perform his last rituals. He died on Masi Magam day and as promised Lord Shiva performed his last rites. Lord Shiva blessed the king that whoever bathes in the sea during Masi Magam will get ‘salvation.’ It is believed that every year Lord visits the sea to perform the last rites of the King Vallala.

In ancient times, several sages were arrogant. They ignored the Gods as they gained knowledge. Their egos grew immensely. The sages were over confident that they can guide human beings. They no longer needed the blessings of the Gods. Angry Lord Shiva decided to teach a lesson to sages. He took the form of a beggar. The sages did not recognise him and assumed that he was a devil. The sages misused their power and mantras. They sent a mad elephant to attack Lord Shiva. As the elephant was about to attack Lord Shiva, he immediately disappeared. Goddess Parvati was worried that the entire world would come to an end with the disappearance of Lord Shiva. Lord Shiva killed the elephant and emerged by wearing the elephant's skin. It is known as "Gaja Samhara" Soon the sages realised their mistake and apologised to Lord Shiva.

Maha Maham is of great importance at the Adi Kumbeswaran temple in Kumbakonam. There is sacred tank called Maha Maham. 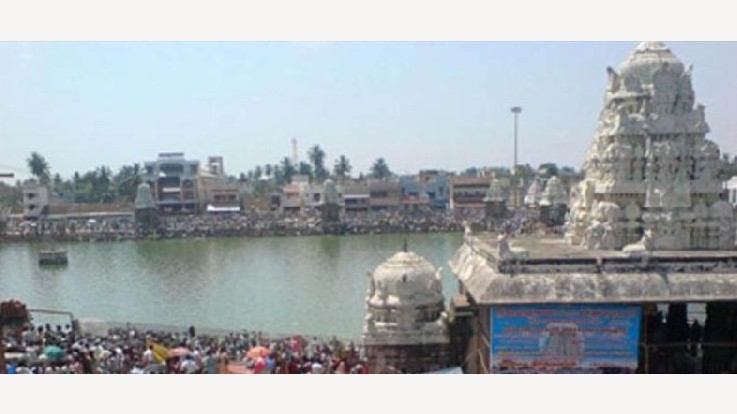 A view of Masi Magam Celebration

On this day is the idols are taken to the seashore or ponds. Hence, the festival is also known as holy bath ceremony. Processions from different temples arrive at the sea with the idols of Lord Vishnu and Lord Shiva. Idols of Shakti are also brought to the sea. Pujas and other rituals are performed at the sea shore. Thousands of devotees throng the sea shore to offer prayer. The temple Idols are given a bath in the sea, pond or lake as per traditional rituals. Idols of gods and goddess worshipped in the Temples are carried in a big procession. In some temples, Gaja-puja (elephant worship) and Ashwa pooja (horse) are performed. The devotees take a bath in the sea with the belief that the holy waters wash away all the sins. The festival of Masi Magam appears very colourful and divine.