Saptami Tithi is devoted to Lord Surya. Shukla Paksha Saptami of Magha month is known as Ratha Saptami, Achala Saptami or Magha Saptami. It is believed that Lord Surya started enlightening the world on Ratha Saptami day which was considered as a birthday of God Surya. Hence it is also known as Surya Jayanti. Ratha Saptami is a highly auspicious day.

Ratha Saptami is the seventh day following the Sun’s movement towards North starting from Capricorn. It is represented as the Sun God turning his Chariot drawn by seven horses, with Aruṇa as the charioteer, towards the northern hemisphere. The seven horses symbolize the seven days of a week. The 12 wheels of chariot represent the 12 signs of the Zodiac. The Sun’s house is Leo, and he moves from one house to the next every month. It takes 365 days to complete this cycle. Ratha Saptami marks the gradual increase in temperature across South India and the arrival of spring and harvesting season. For Indian farmers, it is a beginning of the New Year. Ratha Saptami is a very auspicious day. In Hindu religion, Sun God is referred as the God of Health and worshiped for good health and longevity. 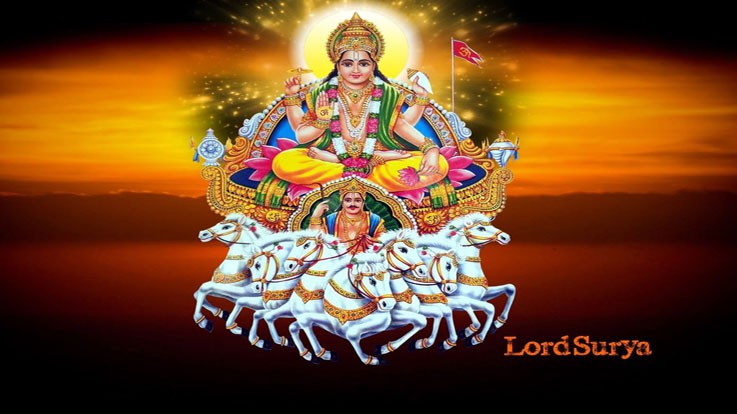 Sun God with his Chariot of seven horses

Ratha Saptami is celebrated as the birth of Surya to sage Kashyapa and his wife, Aditi. As per the legend, King Yashovarma of Kamboj empire had no heir to rule his kingdom. Soon, his prayers were answered, and he was blessed with a son. His son was terminally ill. A sage who visited the king advised that his son should perform Ratha Saptami puja to get rid of his illness. After performing puja, his health was restored, and he ruled the kingdom.

It is also said that Sage Bhisma breathed his last breath four days after the Rathasaptahmi day on ekaadashi.

On the day of Ratha Saptami, devotees take a holy bath before sunrise. Ratha Saptami Snan is an important ritual and should be performed at the time of ‘Arunodaya.’ It is believed that taking a bath during this time, will free a person from all illnesses and ailments. In Tamil Nadu, devotees take a sacred bath using Erukku leaves and offer ‘Arghyadan’ to Sun God at the time of sunrise. It is performed by offering water from a small Kalash in Namaskar Mudra to Lord Surya. Many devotees perform this ritual 12 times and chant twelve different names of Lord Surya. Devotee lit Diyas and worship Sun God with red flowers, Camphor, and dhoop. It is believed that performing these rituals to Sun God will be bestowed with good health, longevity, and success.

On the day of Ratha Saptami, women draw the images of Surya God along with the chariot as a welcoming gesture. The milk is put in mud vessels and boiled facing towards the sun. A sweet rice or ‘Paramannam’ Bhog is prepared from this milk for offering to Sun God. Chanting ‘Gayatri Mantra’ and ‘Surya Sahasranaam,’ ‘Adityahridayam’ is considered very auspicious on this day. Taking a bath before sunrise during Arunodaya is considered healthy as it helps to get rid of all types of ailments and diseases. Hence, Ratha Saptami is also known as Arogya Saptami. After taking a bath worship Lord Surya during sunrise by offering Arghyadan. It is performed by offering water to Lord Surya from Kalash with folded hand in Namaskar Mudra facing towards Lord Sun in standing posture. Lit Deepak of pure Ghee and worship Sun God with Kapoor, Dhup, and red flowers. By following the rituals of morning bath, charity and Arghyadan to Suryadev devotees are bestowed with long life, good health and prosperity.