An incarnation of Lord Muruga was born on a Full Moon day in the Vishakha nakshatra of the Tamil month Vaigasi. Vishaka nakshatra is a combination of three bright stars. It is the sixteenth nakshatra of the 27. On this day Lord Muruga manifested to destroy the evil forces, establish dharma and grant supreme protection and wisdom. The divine wedding of Muruga and Valli is performed on this day in temples.

Muruga temples hold the ten-day Brahmotsavam festival on Vaigasi Visakham. Devotees carry Pal kudam or milk pots for Abhishek to Murugan and carry kavadi ( a decorated yoke) on the shoulders in procession to the Murugan temple. On this day, special pooja, havan, Aarti and Abhishek are conducted for Lord Muruga to seek his blessings. It is very auspicious to perform or witness the divine wedding of Muruga to Valli. It is believed that all the problems related to marriage will be solved and happiness and auspiciousness would be conferred. Lord Murugan is worshipped to get rid of the problems related to Planet Mars, especially Kuja Dosha or Manglik dosha. 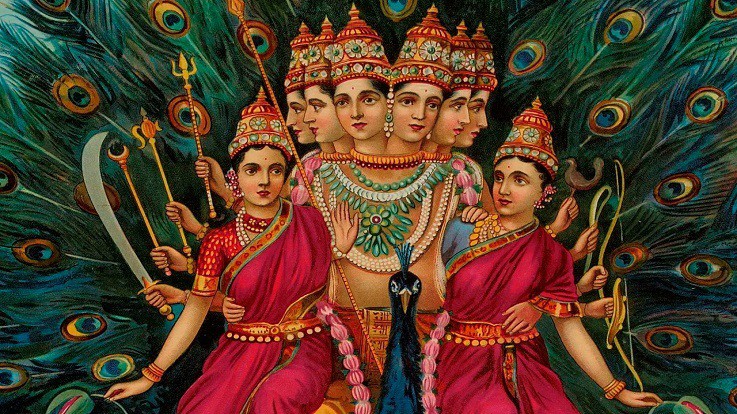 Lord Murugan and his escorts

Lord Muruga was incarnated to destroy the demons named, Surapadma, Tarakasura, and Singamugha. When the Gods beseeched Lord Shiva for help, he meditated, and six sparks of fire emanated from his third eye. Hence, Lord Murugan is also known as Skanda. The fiery sparks were highly unbearable. Hence, it was carried to the sacred River Ganges by Agni and Vayu. They dropped the sparks in the river. Mother Ganges carried the fiery sparks to Saravana pond which was covered by water reeds. The sparks transformed and Lord Muruga manifested as six babies on six Lotuses that bloomed in the pond. The six babies were taken care by the six women called Karthikai Pengal. Hence he was called Kartikeya, son of Karthikai. Later, Goddess Parvati embraced the six babies and made it as one with six heads and 12 hands. He was named Shanmuga. The six faces of Murugan represents creation, preservation, destruction, involution, grace, and source of wisdom. He is the Lord of all knowledge and imparted the meaning of the primordial cosmic word OM to his father, Lord Shiva. 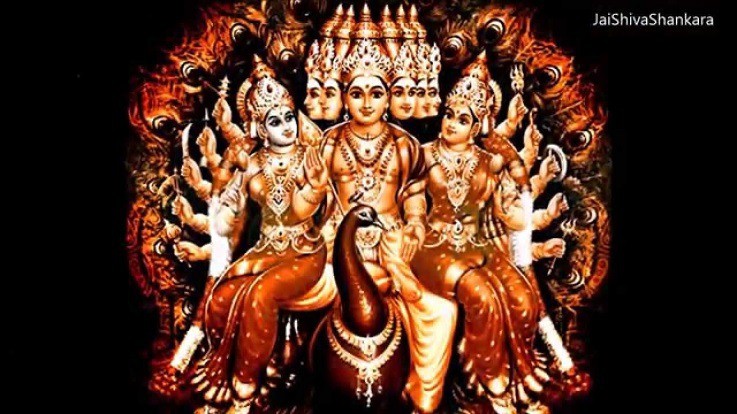 Lord Murugan with his six heads

When demon’s brutality went to severe, Lord Shiva decided to destroy them. Lord Shiva gave the eleven Rudras eleven weapons to Murugan. Goddess Parvathi gave the Vel (Spear) to Lord Murugan. The Vel is the most effective weapon in Lord Muruga's ordnance. Murugan stayed in Thiruchendur. The battled went on for ten days, and Lord Murugan wrecked Soorapadman and his siblings. Soorapadman took the disguise of a huge mango tree. Muruga's Lance cut part the tree. One part of the tree turned into a peacock, and another turned into a cock. Lord Muruga selected the peacock, as his vehicle and the cock as his flag.

Lord Muruga is the embodiment of knowledge and power. Praying to him on this day will relieve the sins. Devotees prepare sweet Pongal as a food offering to Lord Murugan and recite Subramanya Bhujangam, Thirupughazh and other hymns in praise of him. It is auspicious to offer red oleander flowers and at least six Nagalinga flowers to Lord Muruga. Donate food to the needy is a must. Devotees also Visit Muruga temple on this day to earn the grace of the Supreme Lord.