Lord Ram was born as the eldest son to King Dasaratha and Queen Kausalya. His birth was sourced to kill the evil demon Ravana of Lanka.Rama with his wife Sita and Lakshmana went into exile for fourteen long years in respect to his father’s promises to his second wife Kaikeyi. In 14 year exile, Ravan abducted Sita to his kingdom Lanka.

Hanuman and Sugreeva meet:-On their way to find Sita, they came across an army of monkey leaded by King Sugreeva, who was ready to help them. There was a monkey named Hanuman, who vowed to be at Rama’s service.Now Hanuman was no ordinary monkey as he had power to fly and could leap over the ocean in a single strive with super human strength. Obviously, Hanuman became Rama’s strongest ally. And it was Hanuman who finally found Sita imprisoned in Ravana’s Kingdom.He came back to Rama with Sita’s whereabouts and handed over Sita’s jewel that he had brought from Lanka.

LankaDahan:-Rama, Lakshmana, Hanuman and their army of monkey’s merged towards the ocean at Mahendra Hill. The army was able to build a bridge over the ocean only by Rama’s magical powers. They built a bridge with rocks very soon. Cheering with excitement the army crossed the ocean and reached Lanka. 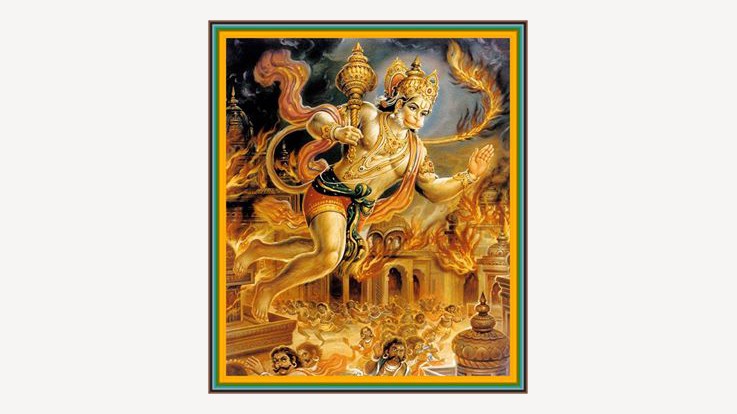 Vibhishana, younger brother of Ravana, advised Ravana to return Sita back and surrender to Rama. Ravana refused and asked him to leave. Vibhishana went to Rama and joined his army.

Rama sent a message first to Ravana through his messenger Angada, his army’s head to return Sita back or else should face the battle. But Ravana with ego refused and even attacked Angada.Rama and his army prepared for the battle and the next day Rama ordered his army to attack Lanka.Ravana planned carefully and placed his warriors at each end. He even sent his son Indrajit, master of black magic to fight against the army.

Next day, the monkeys rushed furiously and propelled over huge walls and gates of the city. A fierce battle started between the two mighty armies. The army of Ravana seemed to look like another massive wall. Army of Rama stood to fight in ordered groups and surrounded Lanka on all sides instructed by Rama.

The beautiful city of Lanka got destructed with thousands of deaths happened on either side. Ravana lost his warriors, his brother Kumbhakarna and his son Indrajit too in the battle. And Rama and his army managed to kill all the chief warriors and demons except one, Ravana.

End of Ravana:-Ravana now entered into the battle against Rama. A vigorous battle started between them. Vibhishana told Rama that Ravana’s weakest point was in his navel. Rama with his powerful arrow shot Ravana in the navel and killed him instantly.