The festival of Rath Yatra is dedicated to Lord Jagannath. It is held annually at Puri in Odisha. It is the oldest Ratha Yatra whose descriptions can be found in Brahma Purana, Padma Purana, Skanda Purana and Kapila Samhita. Rath Yatra is celebrated on Ashadha Shukla Paksha Dwitiya.The festival commemorates Jagannath's annual visit to Gundicha Temple via Mausi Maa Temple near Balagandi Chaka, Puri. 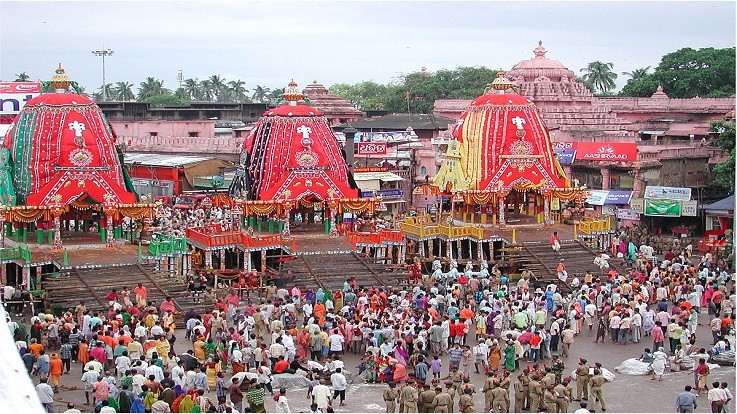 A View of the Rath Yatra 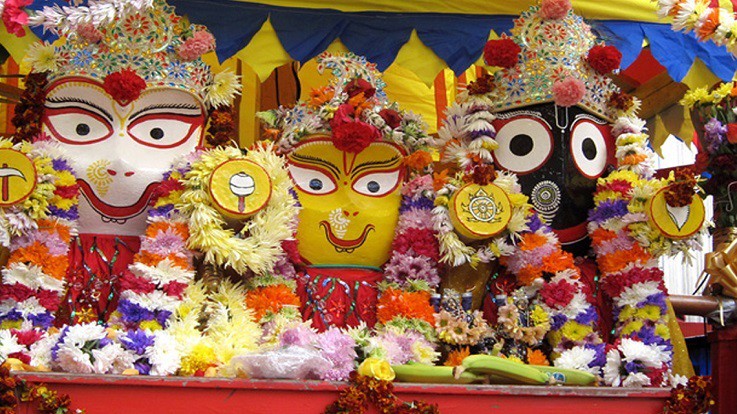 On this day Lord Krishna defeated Kansa and appeared in Mathura in a chariot with Balaram.

Devotees in Dwarka celebrated the day when Lord Krishna took Balaram, and Subhadra for a ride on a Ratha around the beautiful Dwarka city.

Once in Dwarka, Lord Krishna's eight queens requested mother Rohini to narrate the transcendental pastimes of Lord Krishna with Gopis in Vraja. Rohini sent Subhadra to guard the Palace Doorway. When Lord Krishna and Balaram arrived there, Subhadra stood between the two. Just then Sage Narada appeared. Seeing the siblings standing together, Narada humbly prayed, "May the Three of you grant darshan in this manner forever." Lord Krishna granted the boon. And they reside in the Jagannath Temple in Puri.

During the cremation of Lord Krishna in Dwarka, Balaram dashed into the ocean with Lord Krishna's partially cremated body. Subhadra too followed him. At the same time, King Indradyumna of Puri had a dream that the Lord's body would float up to the shores of Puri. He should build a temple in the city and consecrate the wooden idols of Lord Krishna, Balaram, and Subhadra. The bones of Lord Krishna's body should be placed in the hollow back of the idol. Next day, he found the splinters of bone and took them. Vishwakarma, the architect of the gods carved the idols. King Indradyumna consecrated the idols and installed them in the temple. Every year a grand procession is carried out with the idols of Lord Krishna, Balaram, and Subhadra in three gigantic Chariots. 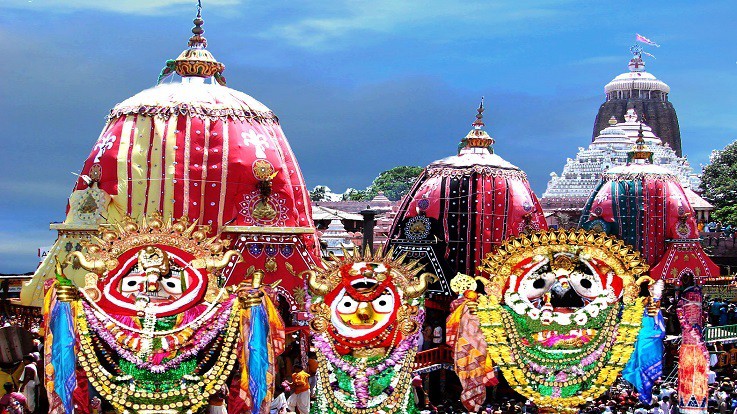 A view of the celebration

During Ratha Yatra, the deities of Jagannath, Balaram, and Subhadra are taken out in a procession to Gundicha Temple. They remain there for nine days. The return journey of Lord Jagannath is known as Bahuda Jatra. Three richly decorated chariots are pulled through the streets of Puri called Badadanda. Thus, the annual journey of deities to Gundicha Temple commemorates. Pulling the chariots is considered as an auspicious deed. The huge processions accompanying the chariots play devotional songs with drums, tambourines, trumpets.